by The National Collins22 Society / Wednesday, 31 August 2022 / Published in Events 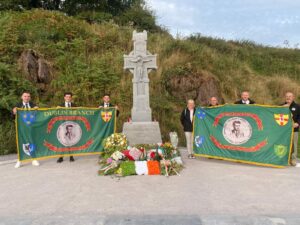 This weekend, several members of our Society embarked on yet another adventure of West Cork, this time on the trail of Michael Collins and places associated with him. Our first port of call was to the Michael Collins House Museum at 7 Emmet Square situated in the heart of Clonakilty which gives an insight into the life of Michael Collins Himself thus bringing the history of Irish independence to life. Many of the artifacts on display include two of his diaries/note books, one dated ‘Tuesday,  1st of November 1921′ and the other dated Monday, 6th of February 1922’. A really interesting place and highly recommended.

It was off then to the Michael Collins Centre where we were greeted by our friend and host Tim Crowley and his wife Dolores. A large crowd was already in attendance when we arrived and as always, Tim gave an outstanding lecture on Micheal Collin’s life, and a detailed account of the fateful ambush at Béal na mBlàth which resulted in his death and those who took part in it. His lecture was accompanied by a live sideshow which really added to the talk. Although some of us were no strangers to the Centre, there were many new additional artifacts which Tim had acquired since our last visit that he proudly showed to us, including an autographed menu by the Irish representatives during the Treaty negotiations, this particular one however dated on his birthday. Among the many items, I was delighted to see a bench from one of the Frongoch Internment Camp huts which is on loan there, and we also had our photos taken among the life-sized replica vehicles of the Bèal na mBlàth ambush site which was fun.

Our group then headed for Sam’s Cross and some refreshments in the ‘Four Alls’ before heading to Béal na Bláth to pay our respects and where we had our photos taken with our Collins22 banners at the monument.

Although this project was designed and developed by key experts in archaeological historic landscapes and memorial historic landscapes,  it was disappointing to find no historical analysis information boards of the battlefield and ambush area, which left us to assume that the project hasn’t been completed yet.

We finished off our long and interesting day with a few creamy pints in Leap Village which was really a hive of activity, then back to our beautiful digs in the heart of beautiful countryside to relax for the evening over some food and drinks, and reflect on our day, the places we visited and the people we met along the way.

Following on from what was a very interesting and productive day on Saturday, yesterday (Sunday) was more a leisurely and taphophilia based affair before the long haul home back to Dublin. After a light breakfast and farewells to our very welcoming Swiss hosts, our first port of call was to the nearby ‘ancient’ Kilmacabea Cemetery. Although we found nothing of revolutionary interest there, we did discover a box tomb to which a plaque was affixed with the following inscription mentioning renowned writer Frank O’Connor:

Our next stop was to Abbey Cemetery in Rosscarbery to find and visit the final resting places of Michael Collin’s parents Michael and Marianne whose headstone also references their famous son Michael and Glasnevin Cemetery in Dublin.

Besides the ancient ruins situated there of Saint Fachtna’s Chapel, we were delighted to discover the burial ground of O’ Donovan Rossa’s family, built of slate and what appears to be black stone, in the style of a dwelling from the time of An Gorta Mòr, during which he and his family were hit hard. His father died in 1847 after he contracted a fever. Rossa’s best-known poem, ‘Jillen Andy’, composed over twenty years later while he was in prison is a starkly unpolished description of his participation in the burial of a famine victim at Rosscarbery Abbey. So the Famine certainly had a huge impact on him and situated outside the entrance to the cemetery are three stain glass windows in a recently constructed wall, one depicting an image of O’ Donovan Rossa himself. Also outside the entrance is huge original Famine pot.

It was then off to Clonakilty for a ramble about and a well deserved dinner in the Imperial Hotel followed by a visit just up the street O’Donovan’s Hotel from where Michael Collin’s delivered his pre-election speech on the 15th of June 1922.

We then stopped by the 1798 monument in the centre of the town which commemorates the Battle of Cross, fought on 19 June on a spot on the Shannonvale-Ballinascarty Road known locally as the Big Cross,  situated about four miles east of Clonakilty in West Cork. According to sources it was the only battle fought in the rebellion in Cork or indeed the whole of Munster.

We then searched for a newly erected plaque to a National Army soldier named Jeremiah McDonald who was killed there during the Civil War on the 18th of August 1922 when Sean Hales’s Column was taking control of the town, and whose death is recorded in my book ‘Forgotten Fallen’.

It was then off to Tipperary to visit our Founder Bill Martin’s grave which I have shared in a previous post.  On to the Horse and Jockey then for refreshments and back to Dublin.

What an exciting and full weekend.