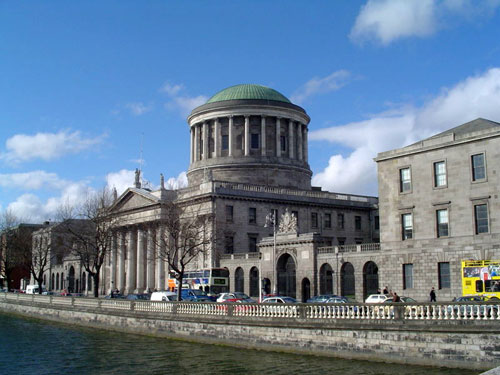 This beautiful building was built in 1796 by the architect James Gandon who also built the Dublin Customs House. it was gutted during the Irish Civil war 120 years later when government forces bombarded anti-treaty rebels that had taken over the building. The Four Courts was reconstructed in 1932 according to Gandon’s original plans. The hall under the dome is open to the public.

The 1st Battalion of the Dublin Brigade led by Commandant Edward Daly occupied the Four Courts (law courts) and the adjacent streets on the north bank of the river Liffey, almost a mile to the west of the GPO during the Easter rising of 1916.

This was a strategic area as it controlled the main route between the military barracks to the west of the city and the GPO. While his battalion normally numbered 400, only 150 turned out on the day, but the numbers grew over the following days as word of the Rising spread. Headquarters were at the entrance to the North Dublin Union (later St Laurence’s Hospital) on North Brunswick Street. The 1st Battalion was involved in some of the fiercest fighting of the Rising, the first skirmish occurring on Monday afternoon when Volunteers in the Four Courts got the better of a party of Lancers (cavalry) escorting lorries loaded with munitions. On Wednesday the Volunteers captured two enemy positions in the area, the Bridewell which was held by police and Linen-hall Barracks, which was occupied by unarmed army clerks.

By Thursday the area was effectively cordoned off by the South Staffordshire and Sherwood Forest regiments. Fierce fighting ensued, particularly in the North King Street area, where a number of civilian men were killed by soldiers of the South Staffordshire Regiment. The fighting continued until Saturday evening when the news of Pearse’s surrender filtered through. Commandant Daly is said to have shown great concern for the civilian community; he took over Monks’s bakery and arranged for the distribution of bread to the local community.

The historic Four Courts, where the sittings of the Irish Supreme Court, High, Circuit & District Courts take place. The building was founded by the Duke of Rutland – Lord Lieutenant of Ireland in 1786, its construction having begun in 1776. The original architect Thomas Cooley, who also designed the Royal Exchange Building – now City Hall, died in 1784 before its completion.

James Gandon was appointed as architect to complete the project, and added features including the four courts to the original designs. The rooftop sculptures by  Edward Smyth represent Moses, Authority, Justice & Wisdom. The building was completed in 1802 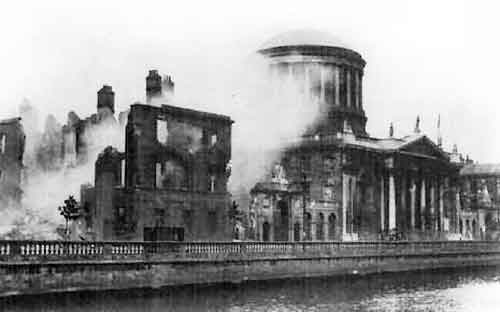 At the outbreak of the Irish Civil war (1921-1922), the building’s ornate interior & original copper domed rotunda roof sustained extensive damage during fighting between the Anti-Treaty & Irish Free State forces when the building was shelled with 18-pounder field guns on June 28th 1921.

Before the Anti-Treaty forces surrendered two days later, the public records office and many irreplaceable documents & historical records were destroyed by fire following an explosion in the building.