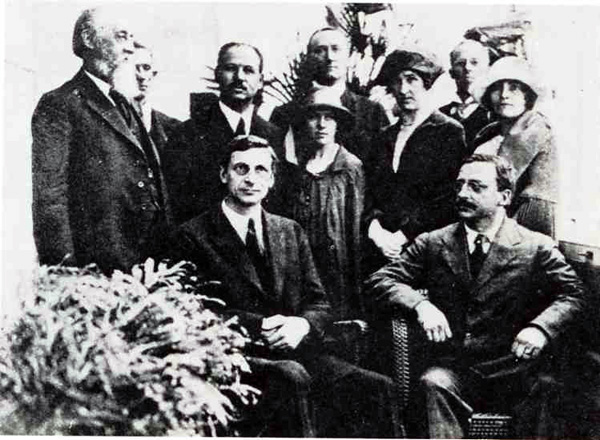 Composition of the delegation was as follows: De Valera, Griffith, Stack and Barton. The Lord Mayor of Dublin, Count Plunkett and Erskine Childers accompanied the delegation. The Truce had already been negotiated and agreed to by both parties and was in force since 11 July 1921, a day before the delegation left for the London conference. The photo of the delegation sent to England appeared in the Irish Independent on 15th July 1921. It was taken in the Grosvenor Hotel London. The man behind Griffith is Robert Barton. The three women are a Mrs Farnam, whose doctor husband is the other man in the picture beside the Lord Mayor, and the two delegation secretaries, Miss Lily O’Brennan (sister-in-law of Eamonn Ceannt) and Miss Kathleen O’Connell (also secretary to de Valera from 1920 until her death in 1956) 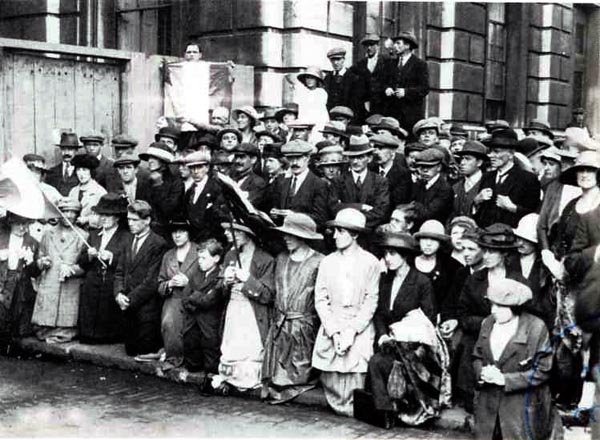 Londons Irish praying for the Success of the July Truce negotiations

On the 9 July 1921, a Dublin boy, Paddy O’Connor made his way to the hills around Donohill, South Tipperary, looking for Mrs Quirke’s house. He was a messenger and had come all the way from Dublin with an urgent message for Ernie O’Malley, the second in command of the IRA’s second Southern Division. O’Malley was effectively head of his own mini-republic in rural Tipperary, where British forces rarely ventured and when they did, took care not to leave the roads. The war there was increasingly bitter. Three British officers, unlucky enough to fall into O’Malley’s hands some weeks before, at a time when three IRA Volunteers were being shot by firing squad in Dublin, were coldly put to death in reprisal. When O’Malley returned to his safehouse, the boy, who had refused to discuss his business with any of O’Malley’s subordinates, handed him a message from Richard Mulcahy, IRA Chief of Staff. It read; In view of the conversations now being entered into by our Government with the Government of Great Britain, and in pursuance of mutual conversations, active operations by our forces will be suspended as from noon, Monday, 11 July. O’Malley wrote later that he was ‘bewildered’ by the order. The first senior IRA officers had heard of the Truce was this, ‘bald message’. Nevertheless, he had orders typed out and sent to the five IRA Brigades under his command across Munster. Negotiations The bones of a peace deal had been on the table since the previous December – a British offer of Dominion status for an Irish state on the same territory as Southern Ireland, the Home Rule entity outlined in the Government of Ireland Act of 1920.

Secret talks, carried out via an intermediary, between Lloyd George and Arthur Griffith had produced the compromise. Griffith presented the terms to Michael Collins and the Dail cabinet, who reacted favourably. A truce in December 1920, though was scuppered by Hamar Greenwood, the hardline Chief Secretary for Ireland, who threatened to resign if there was a ceasfire before the IRA surrendered its weapons. He was also confident, as he wrote to Lloyd George that, “The SF [Sinn Fein] cause and organisation is breaking up …there is no need of hurry in a settlement. We can in due course and in our own fair terms settle this Irish Question for good”.

As a result of his intransigence, the two sides would butt heads for six more bloody months. The first half of 1921 saw over 1,000 deaths in the conflict, over twice as many as in all of 1920. And, despite some optimism within the British military that they were getting on top of the IRA, there was no lull in the violence as the summer of 1921 approached.