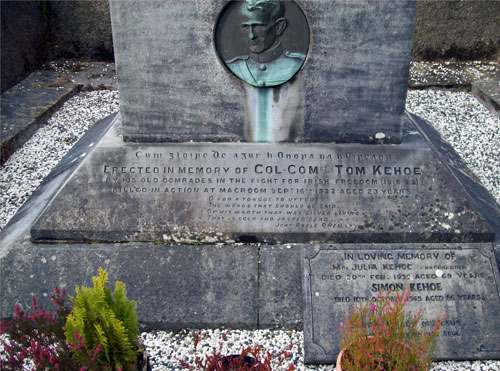 Up to 3,000 former comrades and people gathered at Knockananna graveyard, Co. Wicklow on 6th November 1924. to unveil a monument to the memory of Colonel Commandant Tom Kehoe, by his old comrade ex-Major General Liam Tobin. The gravestone and statue, costing more than £600, a fortune in the context of the 1923′ miserly Cenotaph to Michael Collins, was paid for by Army mutineers, the 150 former soldiers who formed a guard of honour, and by the columns of men listed in the recent Newspaper reports complete with there former Ranks.

Associated in attempt to spring Sean MacEoin from Mountjoy

An IRA team comprising Tom Keogh, Bill Stapleton, Paddy McCaffrey and Pat McCrea capture a British armoured car (after scouting by Charlie Dalton) and drive it down the North Circular Rd where they pick up Emmet Dalton and Pat Leonard who were dressed in British Army uniforms. They drove into Mountjoy Jail with an Order to remove MacEoin. However, MacEoin was not in the Governor Munroe’s office as planned. A sentry seen some civilians, who were part of the IRA rescue party, rush the front gate and shot at them so the rescue party withdrew with one casualty on the British side. The rescue attempt was organised by Michael Collins and the rescue parties led by Paddy O’Daly.

(From the Alphonsis Culleton story). Michael Collins had left a written statement that I was to be looked after if anything happened to him. The man who was to do that was Lieut. Comdt. Tom Kehoe and I was in the Royal George Hotel in Limerick when I heard of Collin’s death”.

At that time, Lieut. Comdt. Kehoe was in hospital and not for the first time in his young life, the grief-stricken Phonsie disobeyed orders to tell him about the tragic ambush in West Cork.

A few weeks later, his new protector was also dead, killed in an action in West Cork.