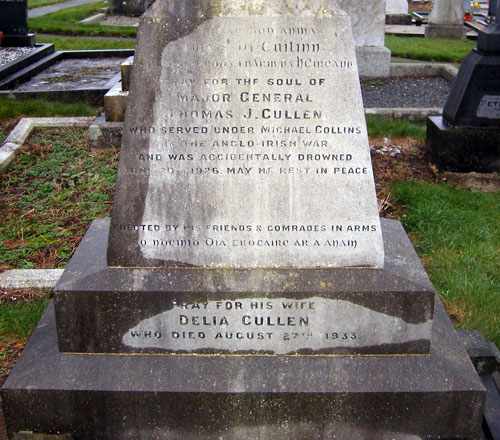 Tom Cullen’s baptism of fire occurs while serving as a young Irish Volunteer and member of the Irish Republican Army during Dublin’s 1916 Easter revolt. After his arrest, internment in Wales and release by the British government, he returns home.

Quite unexpectedly, Tom becomes a friend and valued colleague of Michael Collins. During Ireland’s War for Indepndence (1919-1921), Cullen, a West Wicklow man, embarks upon a life full of danger and intrique. Serving as Collins’s Assistant Director of Intelligence, he matches wits with some of Britain’s most dangerous spies and ruthless assassins.

In his biography of Michael Collins, Irish historian Tim Pat Coogan states, …Tom Cullen…with [Frank] Thornton and [Liam] Tobin…completed the [Collins’s] intelligence team which broke the [Dublin] Castle’s spy system. A seasoned vetern by the autumn of 1921, Cullen now one of Collins’s closest associates, rises to the rank of major general in Ireland’s new army.

After Michael’s tragic death in 1922, it is Tom Cullen who leads the procession carrying his dear comrade’s coffin to its final resting place in Dublin’s Glasnevin cemetery. It is the determined accomplishments of this little-known, heroic Irish revolutionary that forms the centre-piece of Cathal Liam’s new book. For indeed, Ireland’s independence could not have been achieved without the sacrifices of such behind-the-scenes individuals. Tom Cullen’s story deserves to be told and now, at last, “FEAR NOT THE STORM” pays tribute to a life so richly lived. He is Buried in Rathnew, Co. Wicklow.