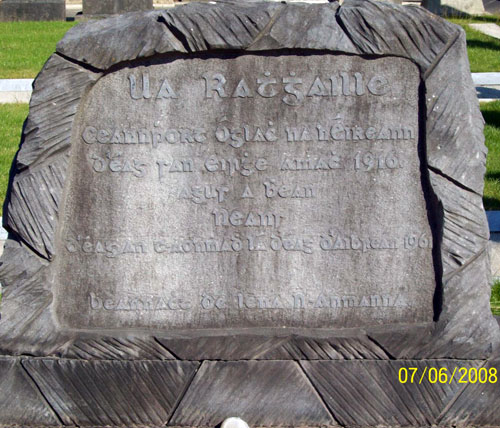 Michael Joseph O’Rahilly (22 April 1875 – 29 April 1916) self-described as The O’Rahilly was an Irish republican who took part in the Easter Rising, during which he was killed in the fighting.

Born in Ballylongford, County Kerry, he was a republican and a language enthusiast, a member of An Coiste Gnotha, the Gaelic League’s governing body. Was educated in Clongowes Wood College (1890-3).[1] He was well travelled, spending at least a decade in the United States and in Europe, before settling in Dublin. He was a reasonably wealthy man; the Weekly Irish Times reported after the Easter Rising that O’Rahilly “enjoyed a private income of £900” per annum, plenty of which went to “the cause he espoused.” More importantly, The O’Rahilly was a founding member of the Irish Volunteers and its Director of Arms. He personally directed the first major arming of the Volunteers, the landing of Mausers at Howth on 26 July 1914.

The O’Rahilly was not a member of the Irish Republican Brotherhood (IRB), regardless of his support for militancy, and hence was not party to the plans for the rising at Easter. The IRB went to great lengths to prevent those leaders of the Volunteers who were opposed to unprovoked, unilateral action from learning that a rising was imminent, including its Chief-of-Staff Eoin MacNeill, Bulmer Hobson, and O’Rahilly. When Hobson (who was still a member of the IRB at least in name, despite being estranged from its leaders) discovered that an insurrection was planned, he was kidnapped by the IRB leadership. The O’Rahilly, on hearing of this, called out to St. Enda’s School on Good Friday to confront Patrick Pearse. He barged into Pearse’s study, brandishing his revolver he announced “Whoever kidnaps me will have to be a quicker shot!” Pearse managed to calm O’Rahilly, assuring him that Hobson was unharmed, and would be released after the rising began. O’Rahilly, meanwhile, spent the entire night driving throughout the country, informing Volunteers leaders in Cork, Kerry, Tipperary, and Limerick that they were not to mobilize their forces on Sunday, thus largely preventing any rising outside of Dublin itself.

After arriving home, he discovered that the Rising was about to begin in Dublin on Easter Monday. Despite all his efforts to prevent any such action (which he felt could only lead to defeat), he set out to Liberty Hall to join Pearse, James Connolly, Tom Clarke, and the other leaders to take part. Arriving in his motorcar he gave one of the most quoted lines of the rising, “Well, I’ve helped to wind up the clock — I might as well hear it strike!” Another famous, if less quoted line, was his comment to Countess Markievicz, “It is madness, but it is glorious madness.” He fought with the GPO garrison during Easter Week, though he spent much of his time on the upstairs floor, away from the other leaders with whom he was still angry.

One of the first British prisoners taken in the GPO was Second Lieutenant AD Chalmers who was bound with telephone wire and unceremoniously lodged in a telephone box by the young Volunteer Captain and IRB activist, Michael Collins. Chalmers recalled O’Rahilly’s kindness to him. In a statement to a newspaper reporter, he said that he was taken from the telephone box after three hours, brought to the first floor where O’Rahilly gave an order concerning the prisoner: “I want this officer to watch the safe to see that nothing is touched. You will see that no harm comes to him.” 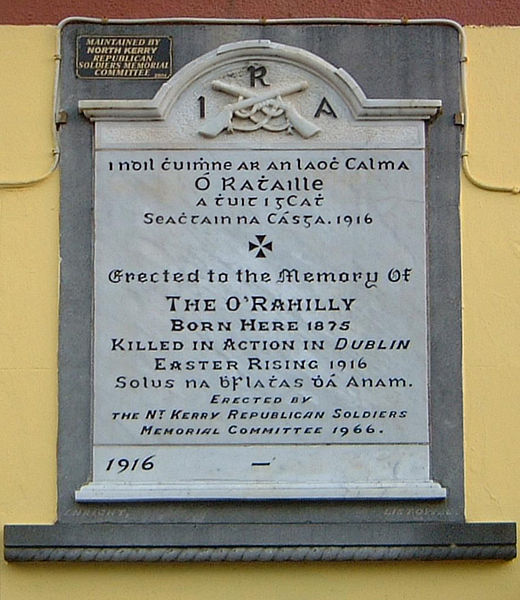 On Friday 28 April, with the GPO on fire, The O’Rahilly volunteered to lead a small party of men in search of a route out of the GPO to Williams and Woods, a factory on Great Britain Street (now Parnell Street). A British machine-gun at the intersection of Great Britain Street and Moore Street caught him along with most of his party. The O’Rahilly slumped into a doorway on Moore Street, wounded and bleeding badly but soon made a dash across the road to find shelter in Sackville Lane (now O’Rahilly Parade). With this attempt to find shelter, O’Rahilly again exposed himself to sustained fire from the machine-gunner.

It is often mooted that nineteen hours after receiving his wounds on Friday evening and long after the surrender had taken place on Saturday afternoon, The O’Rahilly still clung to life. This story comes from an ambulance driver, Albert Mitchell, who begins his recollections by reminding the reader that it is more than thirty years after the event. It is clear, for instance, that O’Rahilly died in Sackville Lane which joined onto Moore Lane and Mitchell can be forgiven for confusing the two lanes. The following is an extract from Mitchel’s witness statement (WS 196):

While driving through Moore St. to Jervis St. Hospital one afternoon towards the end of the week the sergeant drew my attention to the body of a man lying in the gutter in Moore Lane. He was dressed in a green uniform. I took the sergeant and two men with a stretcher and approached the body which appeared to be still alive. We were about to lift it up when a young English officer stepped out of a doorway and refused to allow us to touch it. I told him of my instructions from H.Q. but all to no avail.

When back in the lorry I asked the sergeant what was the idea? His answer was – ‘he must be someone of importance and the bastards are leaving him there to die of his wounds. It’s the easiest way to get rid of him.’

We came back again about 9 o’clock that night. The body was still there and an officer guarding it, but this time I fancied I knew the officer – he was not the one I met before. I asked why I was not allowed to take the body and who was it? He replied that his life and job depended on it being left there. He would not say who it was. I never saw the body again but I was told by different people that it was The O’Rahilly.

On the other hand, Desmond Ryan’s The Rising maintains that it “was 2.30p.m. when Miss O’Farrell reached Moore Street, and as she passed Sackville Lane again, she saw O’Rahilly’s corpse lying a few yards up the laneway, his feet against a stone stairway in front of a house, his head towards the street.”

The specific timing of O’Rahilly’s death is very difficult to pin down faithfully but we can be more precise when it comes to gaining an understanding of his final thoughts. Despite his obvious pain, The O’Rahilly took the time to write a message to his wife on the back of a letter he had received in the GPO from his son. It is this last message to Nancy that Shane Cullen has etched into his limestone and bronze sculpture. The text reads: ‘Written after I was shot. Darling Nancy I was shot leading a rush up Moore Street and took refuge in a doorway. While I was there I heard the men pointing out where I was and made a bolt for the laneway I am in now. I got more than one bullet I think. Tons and tons of love dearie to you and the boys and to Nell and Anna. It was a good fight anyhow. Please deliver this to Nannie O’ Rahilly, 40 Herbert Park, Dublin. Goodbye Darling.’