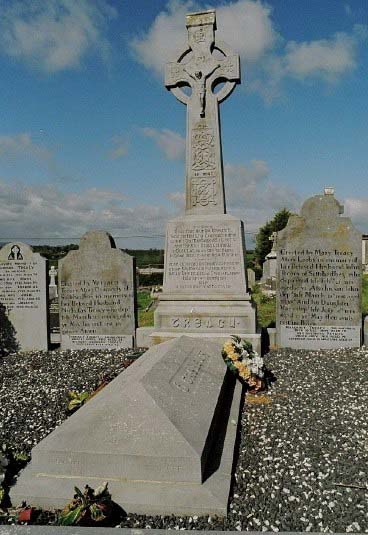 Sean Treacy (Irish: Seán Ó Treasaigh; 14 February 1895 – 14 October 1920) was one of the leaders of the Third Tipperary Brigade of the Irish Republican Army during the Irish War of Independence. He helped to start the conflict in 1919 and was killed in a shootout with British troops in Talbot Street, Dublin during an aborted British Secret Service surveillance operation in October 1920.

Like most of his peers, Tipperary IRA leader Sean Treacy looked old for his age. Dead in 1920 by the time he was 25, and before the War of Independence which he helped kickstart had reached anything like completion, he didn’t pass the years of his youth in a place or time when hard working lads of his class were frequently photographed or cared much what they looked like in the few photos they posed for. He was known, in his community, as an industrious go-ahead small farmer. He had a reputation for thoughtfulness and doggedness.

The raggle taggle war which he and Dan Breen fought down in Tipperary was driven by innovative young provincials who got all their learning through evening classes and from a reading regime heavily reliant on newspapers and much thumbed patriotic paperbacks. They didn’t have it in mind to become photogenic revolutionary heroes.

Because he died before the international media started interviewing IRA leaders, before the memoirs were written, before the monuments got erected, he emerges dimly from the official Tan War record. Dan Breen’s My Fight for Irish Freedom (1924) and Desmond Ryan’s Sean Treacy and the 3rd. Tipperary Brigade (1945) portray him as a saintly figure with Robin Hood, Jesus Christ, and Cúchulainn-like characteristics.

When writing my book ‘Sean Treacy and the Tan War’ I found that a variety of rather gritty interviews given by Dan Breen towards the end of his life gave a pen-picture of Treacy as a real human being. The various Bureau of Military History Witness Statements relevant to the Tan War in Tipperary were equally valuable. There are signs that those who participated in the Soloheadbeg attack compared notes before they gave their various sides of the story but the Statements nevertheless have a certain undeniable authenticity about them.

The Treacy who emerges from those sources was, as Breen stated, not a sort that one comes across too often in a country place. He was, in the words of an old Irish folk song, a man you don’t meet every day. He built himself up into a most impressive leader of people,  a remorseless revolutionary machine.

No wonder a British kill squad tracked in down on the streets of Dublin; with a camera crew in tow, and gunned him down on Talbot Street on this day almost 90 years ago. They already knew the value of a good photo opportunity. – (Joe Ambrose)