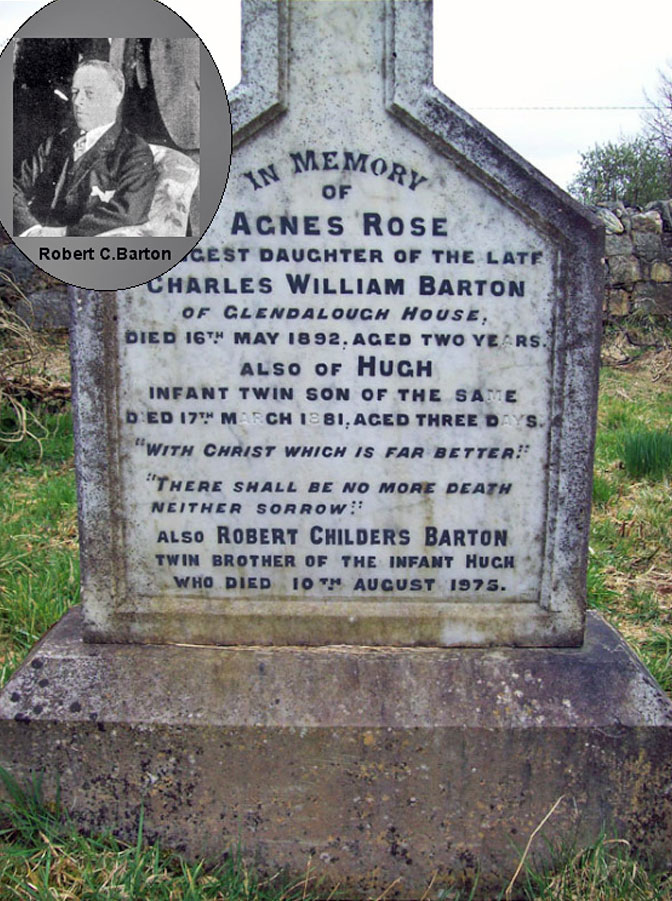 Robert Childers Barton (4 March 1881 – 10 August 1975) was an Irish nationalist, politician and farmer who participated in the negotiations leading up to the signature of the Anglo-Irish Treaty. His father was Charles William Barton and his mother was Agnes Childers. His wife was Rachel Warren of Boston, daughter of Fiske Warren. His double first cousin and close friend was Robert Erskine Childers.

He was born in County Wicklow into a wealthy Irish Protestant land-owning family; namely of Glendalough House. Educated in England at Rugby and Oxford, he became an officer in the Royal Dublin Fusiliers on the outbreak of the First World War. He was stationed in Dublin during the 1916 Easter Rising and came into contact with many of its imprisoned leaders in the aftermath while on duty at Richmond Barracks.He resigned his commission in protest at the heavy-handed British government suppression of the revolt. He then joined the Republican movement.

At the 1918 general election to the British House of Commons Barton was elected as the Sinn Féin member for West Wicklow. In common with all Sinn Féin members, he boycotted the Westminster parliament and instead sat in Dáil Éireann (the “First Dáil”). Arrested in February 1919 for sedition, he escaped from Mountjoy Prison on St. Patrick’s Day (leaving a note to the governor explaining that, owing to the discomfort of his cell, the occupant felt compelled to leave, and requesting the governor to keep his luggage until he sent for it). He was recaptured in January 1920 and sentenced to three years’ imprisonment, but was released under the general amnesty of July 1921.

In May of that year, prior to his release, he was elected as a Sinn Féin member for Kildare–Wicklow in the 1921 Irish election to the House of Commons of Southern Ireland. Once again all Sinn Féin members boycotted this parliament, hence Barton sat instead in the “Second Dáil” of Dáil Éireann. He was appointed Minister for Agriculture of the Irish Republic, then of Economic Affairs. Barton was one of the Irish delegates, along with his cousin, to travel to London for the legendary Anglo-Irish Treaty negotiations.[10][11] He reluctantly signed the Treaty on 6 December 1921, defending it “as the lesser of two outrages forced upon me and between which I had to choose.” He nevertheless was firmly committed to the Irish Republic and despite signing the Treaty rejected it.

He won re-election to Dáil Éireann in June 1922 (the “3rd Dáil”) as the only signatory of the Anglo-Irish Treaty to stand for the Sinn Féin (Anti-Treaty) party, but did not take his seat. After being defeated at the 1923 general election, he retired from politics for the law, practicing as a barrister. He later became a judge. He was chairman of the Agricultural Credit Corporation from 1934–1954. Barton died at home in County Wicklow on 10 August 1975, at the age of 94, the last surviving signatory of the Anglo-Irish Treaty. Éamon de Valera, who was also heavily involved with the Treaty, died only nineteen days later, on 29 August 1975.