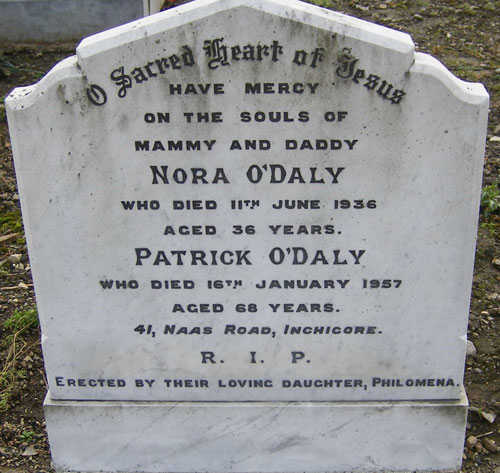 Paddy Daly (1888–1957) sometimes referred to as Paddy O’Daly, served in the Irish Republican Army during the Irish War of Independence[1] and subsequently held the rank of Major-General in the Irish National Army in the period 1922 to 1924.

Daly was born in Dublin in 1888. He fought in the 1916 Easter Rising under the command of his namesake Ned Daly, leading the unsuccessful attempt to destroy the Magazine Fort in the Phoenix Park. He was later wounded in the particularly vicious fighting near the Linenhall. He was subsequently interned in Frongoch for his part in the rebellion until 1918, when he was released as part of a general amnesty for Irish prisoners.

In the War of Independence (1919–1921), he served as leader of the “Squad”, Michael Collins’ assassination unit.

On 19 December 1919, Daly along with Dan Breen led an abortive ambush, at Ashtown railway station near the Phoenix Park, on the British Viceroy, Lord Lieutenant of Ireland and Supreme Commander of the British Army in Ireland, Lord French, as he returned from a private party which he had hosted the previous evening at his country residence in Frenchpark, County Roscommon. Lord French escaped the ambush but Martin Savage was shot dead.

Daly and the men under his command were responsible for the killing of many British intelligence officers, in particular District Inspector Redmond, who had been putting increasing pressure on the squad. Daly himself personally killed several people, including Frank Brooke, director of Great Southern and Eastern Railway, who served on an advisory council to the British military, in June 1920. He did not directly lead any of the attacks on Bloody Sunday but was on standby in one of the Squad’s safe houses. In the aftermath he was arrested and interned in Ballykinlar Camp in County Down.

Daly, along with Emmet Dalton, was also involved in the attempt to free Sean Mac Eoin from Mountjoy Prison on 14 May 1921. He and his men hijacked a British Army Peerless armoured car in Clontarf at the corporation abbatoir, while it was escorting a consignment of meat to a barracks and shot dead two soldiers in the process. The plan involved Dalton and Joe Leonard to impersonate two British army officers (wearing Dalton’s uniforms from his days as a soldier during World War I) and using forged documents “transfer” MacEoin to Dublin Castle. They gained entry to Mountjoy, but were discovered before they could free MacEoin and had to shoot their way out. They later abandoned the armoured car after removing the Hotchkiss machine guns and setting fire to what they could. Towards the end of the war, in May 1921, the two principal fighting units of the IRA’s Dublin Brigade, the “Squad” and the “Active Service Unit” were amalgamated after losses suffered in the Burning of the Custom House. Daly was put in command of this new unit, which was named the Dublin Guard.

Daly’s own account of his activities during the War of Independence is held at the Bureau of Military History in Cathal Brugha Barracks.

After the Anglo-Irish Treaty split the IRA, Daly and most of his men sided with the pro-treaty party, who went on to found the Irish Free State. He was appointed to the rank of Brigadier in the newly created Irish National Army, which was inaugurated in January 1922. When the Irish Civil War broke out in June 1922, Daly commanded the Free State’s troops who secured Dublin, after a week’s fighting. In August 1922, during the Irish Free State offensive that re-took most of the major towns in Ireland, Daly commanded a landing of 450 troops of the Dublin Guard at Fenit, County Kerry which went on to capture Tralee from the anti-treaty forces, acting with severe brutality in Kerry, Daly commenting that ‘nobody had asked me to take kid-gloves to Kerry, so I didn’t’.

As the Civil War developed into a vicious guerrilla conflict, Daly’s men were implicated in series of atrocities against anti-treaty prisoners (see Executions during the Irish Civil War), culminating in a series of killings with landmines in March 1923. Daly claimed that those killed were accidentally blown up by their own mines, but this has since been proved to have been fabricated

Daly married Bridget Murtagh in 1917. She was a sister of Elizabeth Murtagh, the first wife of Commandant Michael Love who served with Daly in the Collins Squad of the IRA, in the Irish Free State Army of the 1920s and during the Emergency period.

He volunteered his services for the Irish Army again in 1940 and was appointed as a Captain to the non-combatant Construction Corps. On his death in January 1957 he was buried with full military honours in Mount Jerome cemetery. He was survived by his brothers, Comdt Seamus O’Daly and Capt Frank O’Daly. His sons were Patrick and Colbert, his daughters, Brede and Philomena.

Daly resigned from the Free State army in 1924 after an incident in Cork concerning the daughters of a republican Doctor. A court martial was held but collapsed as no one was prepapered to give evidence.