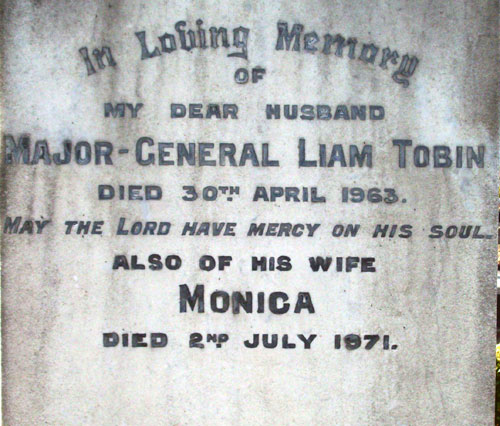 (Born William Joseph Tobin in 1895) was an Irish statesman and officer in the Irish Army. During the Irish War of Independence, he served as an IRA intelligence officer for Michael Collins’ Squad.

Early in 1919, Tobin had become Collins’ chief executive in the Intelligence Directorate, handling many spies in Dublin Castle, amongst others, information from double agent David Neligan. Tobin constructed detailed profiles of everyone remotely connected to the British Government, often using Who’s Who, The Times, and The Morning Post. Tobin was involved in planning the assassinations of British soldiers, informants, members of the Royal Irish Constabulary, the Dublin Metropolitan Police, and operatives of MI5.

Collins’ intelligence operations were based at 3 Crow Street, Dublin, where Tobin had the assistance of Tom Cullen and Frank Thornton

In October 1921, Tobin travelled with the Irish Treaty Delegation as part of Collins’ personal staff.

With the outbreak of the Irish Civil War, Tobin remained loyal to Collins and took the Pro-Treaty side, where he led in the fight against the Anti-Treaty IRA in the south. Disillusioned with the continuing hostilities and in the aftermath of the death of General Collins he formed an association called the IRA Organisation (IRAO) or “Old Irish Republican Army” to distinguish themselves from the anti-treaty insurgents. Tobin believed in the stepping stone doctrine which saw the Treaty as a stage towards full independence.

In later years, Tobin would rebuild relations with his Civil War foes and joined De Valera’s Anti-Treaty Fianna Fáil Party. Tobin joined up with Joseph McGrath to form the Irish Hospital Sweepstakes in the 1930s. Many other former army comrades found work in this lottery. Tobin left the Sweep in 1938. After World War II, Tobin became Superintendent of the Oireacthas for the Irish Dáil.