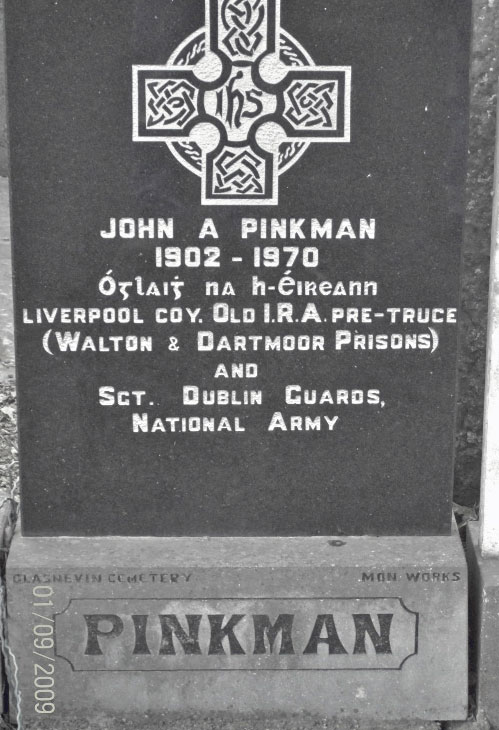 John A. Pinkman (1902 – 1970) a Liverpool born Irish Republican who joined the Free State Army along with the rest of his Liverpool unit is the Author of “In the Legion of the Vanguard” published in 1999 and edited by Francis E. Maguire

John Pinkman was born of Irish parents in Liverpool in 1902.He joined a Sinn Fein club at the age of 16 and the Liverpool Company of the Irish Volunteers two years later. Arrested and sentenced to five years’ penal servitude in Dartmoor Prison for ‘Sinn Fein activities,’ he describes the life he and others endured in England’s most dreaded prison. On his release following the Anglo-Irish Treaty of 1921, he joined the elite Dublin Guards Brigade of the Irish National Army under Michael Collins on its formation early in 1922. He presents an eyewitness account of the fighting during the Civil War in Kilkenny, Dublin andMunster, supplying new and controversial information on the death of Cathal Brugha, the assassination of Michael Collins, and the role of Ersine Childres, challenging the received wisdom of these and other events of the Civil War. His gripping account, told with candour, honesty, and humour, provides new and startling insights on this key period of Irish history. This account is a valuable contribution to source material for the War of Independence and Civil War.