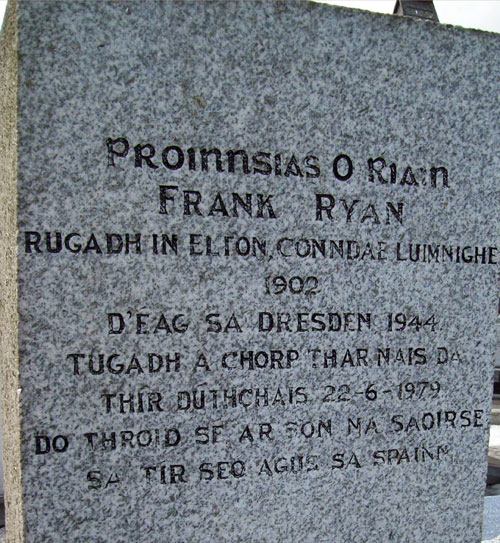 Frank Ryan (1902, at Bottomstown, Elton, Co. Limerick) was a prominent member of the Irish Republican Army, editor of An Phoblacht, leftist activist and leader of Irish volunteers on the Republican side in the Spanish Civil War.

His parents were National School teachers at Bottomstown (parish of Knockainey) with a taste for Irish traditional music, and they lived in a house full of books. He attended St. Colman’s College, Fermoy. From then on he was devoted to the restoration of the Irish language.

He studied Celtic Studies at University College Dublin, where he was a member of the Irish Republican Army (IRA) training corps. He left before graduating in order to join the IRA’s East Limerick Brigade in 1922. He fought on the Republican side in the Irish Civil War, and was wounded and interned. In November 1923 he was released and returned to University College Dublin. He was active in a number of Irish-language societies (in 1924 he won the Cumann Gaedhealach’s gold medal for oratory in Irish) and wrote for Irish-language publications – he briefly edited An Reult (Irish: The Star). He formed the University Republican Club and led it on demonstrations. He graduated in 1925.

He died in June 1944 at a hospital in Loschwitz in Dresden. His funeral in Dresden was attended by Elizabeth Clissmann and Francis Stuart. Clissmann eventually forwarded details of Ryan’s fate to Leopold Kerney in Madrid. According to Stuart and Clissmann, the cause of death was pleurisy and pneumonia.

In 1963, historian Enno Stephan located Ryan’s grave in Dresden, German Democratic Republic. Three volunteers of the International Brigades, Frank Edwards, Peter O’Connor and Michael O’Riordan travelled to East Germany as a guard of honour to repatriate Ryan’s remains in 1979. On 21 June 1979 his remains arrived in Whitefriar St. church – his local church when he was in Dublin. The church was packed with all shades of Republican and left-wing opinion, as well as those from his past such as the Stuarts, the Clissmanns, Peadar O’Donnell (who spoke at the service), George Gilmore, and ex-comrades and sympathizers from all over the world. The cortege on its way to the Cemetery halted at the GPO in memory of the dead of 1916. His coffin was borne to the grave in Glasnevin Cemetery by Irish veterans of the Spanish Civil War, Frank Edwards, Peter O’Connor, Michael O’Riordan and Terry Flanagan. Con Lehane delivered the funeral oration while a piper played “Limerick’s Lamentation”.