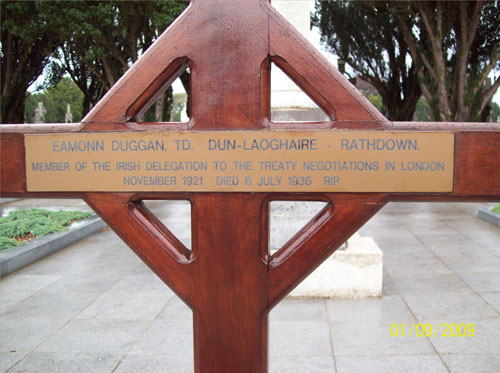 The Anglo-Irish Treaty, signed on 6 December 1921, brought an end to the War of Independence and established the Irish Free State. One Meath man was a signatory of that treaty.

Edmund John Duggan was born in Longwood; the son of a Royal Irish Constabulary officer from County Armagh and a local lady named Dunne. He was educated locally before beginning work as a law clerk. He qualified as a solicitor in 1914 and began to practise at 66 Dame Street, Dublin.

In 1914 Duggan joined the first Dublin battalion of the Irish Volunteers as a private. A year later he was appointed Adjutant of the 1st Battalion and received his first commission as an officer in the Volunteers.

Duggan was married to a Kavanagh lady, who was a relation of the Giles family in Longwood. Paddy and Joe Giles’s mother was related to Mrs. Duggan. Joe Giles was Duggan’s god son. Duggan visited the Giles home on Easter Sunday 1916, the night before the rising, and as he departed handed his godson a crisp £1 note, a huge sum at the time.

Eamonn Duggan was attached to Commandant Daly and so was serving in the North Dublin Union in the initial days of the 1916 rising and then in Father Matthew Hall. Duggan was at the Four Courts when fellow Longwood native, Thomas Allen, was shot. Duggan attempted to get medical assistance from the Richmond hospital but a British officer in charge of the telephone exchange refused to allow the message to go through. Medical assistance was obtained but it was too late for Allen.

In Duggan’s area the Volunteers held their own and suffered little causalities with the heaviest fighting occurring on Friday night and Saturday morning. When informed of the surrender the men under Daly were reluctant to submit but obeyed orders. Duggan was sentenced to three years penal servitude. While at Lewes jail Duggan and de Valera began an organised attempt to break down the prison regime and fight the authorities. In June 1917 the British released the prisoners and Duggan returned to Dublin. He resumed his work as a solicitor. One of his first cases he acted in was at the inquest for the next of kin of his friend and comrade, Thomas Ashe.

On St. Patrick’s Day 1918 Duggan addressed a major meeting in Kells on the case for a sovereign independent state. Later that year Duggan was selected to stand for Sinn Fein in the South Meath constituency. In November 1918 Duggan addressed an election meeting at Summerhill where he told his audience “Our claim to nationhood is a good one…”

The counting of votes took place in the Courthouse, Trim. Duggan was announced as the new M.P. for South Meath with a majority of 3691. At the first meeting of the Dail on 21 January 1919 Duggan read the declaration of independence in English.

For a period Duggan served as Director of Intelligence for the I.R.A. and then in January 1919 his friend, Michael Collins, took on the role.

For the May 1921 election Duggan was in jail. Duggan was released along with Arthur Griffith and Eoin McNeill at the end of June. Together with Robert Barton, Duggan was involved in making the final arrangement for the truce. Duggan accompanied de Valera to London for talks with the British Prime Minister, Llyod George, in July.

In October 1921 Duggan was appointed as a member of the delegation, despatched by de Valera to London to negotiate a treaty between Ireland and Britain. After months of negotiation Griffith was first to agree to sign, then Collins and Duggan. The treaty was signed in the early hours of 6 December 1921. Duggan’s signature on the Treaty was pasted on from an old card that the Irish delegation had access to, according to Robert Barton. Duggan took the boat to Dun Laoighre with a copy of the treaty. He rushed to the city centre where he handed the copy to Eamon de Valera who was attending a function at the Mansion House. De Valera showed no interest in the document and Duggan asked him to read it as it was about to be published. Meath County Council held a special meeting to call on the Dail to ratify the Treaty. The treaty was ratified by the Dail but lead to the Civil War.

Speaking of the Treaty in Trim in 1923 Duggan said “Mr. de Valera told us the day we were appointed that we had a duty to perform that with an army and a navy behind us we would find almost impossible to perform. After an anxious two months in London, with the fate of this country in our hands, the fate of every man, woman and child in this country now and for generations in our hands the fateful night of December 6th came and we had to say yes or no.”

Duggan accompanied Collins to the handover of Dublin Castle in January 1922. Duggan served as Minister of Home Affairs in the provisional government from January to September 1922.

In the June 1922 election Eamonn Duggan was selected as a candidate in the Louth-Meath constituency. He was elected on the first count as was the Labour candidate, Cathal O’Shannon. Duggan was made minister without portfolio. Duggan served as secretary to various ministers for the rest of his Dail career.

In 1933 he felt he could not fight another election and was not a candidate. Captain Patrick Giles of Longwood became his successor as T.D. for Meath.

Shortly afterwards Duggan became a member of the Senate, a post he held until it was dissolved in 1936. Duggan was involved in local politics in Dun Laoighre and he was elected the first chairman of the borough council in 1936. He was addressing a meeting of Fine Gael local election candidates in June 1936 when he collapsed and died. He was interred in Glasnevin cemetery and a wooden cross was recently erected over his grave. A modern industrial estate in Trim was named the Eamonn Duggan Industrial Estate in his honour.