Ambush on the Grey Ghost 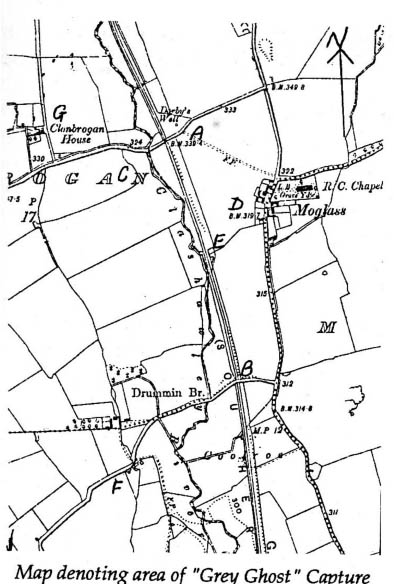 We read, at the present time, about keeping the railway lines open but back in 1922 this problem was a major concern for the opposing forces. The ‘Irregulars’ – I.R.A endeavoured to close the railway lines while the Free Stators’ – tried to keep them open. Virtually all the lines were closed down – cities and towns were cut off. It was reported to An t-Oglach on April 21st 1923, that in Clonmel, for example, people were starving.

The Railway Protection, Repair and Maintenance Corps was formed, with its headquarters at Griffith Barracks, Dublin, Major General Russell was appointed O/C and most of the men were recruited from the Railway Corps at £21.0s per week. The purpose of the Corps was to protect blockhouses, Lancia armoured cars patrolling the tracks and armoured trains. As almost all supplies at the time were transported by rail, the railways were of vital importance. The Lancia armoured car was adapted by fitting a Lancia car on the flanged wheels of an ordinary carriage – because of its camouflage and the silence of its movements, it was nicknamed “The Grey Ghost”.

The Seventh Battalion of the Third Tipperary Brigade planned an ambush on the ‘Grey Ghost’. The attack took place at first light on Sunday 15th of October, 1922, between two hump-backed bridges, just west of Moyglass Village (see map in hg.7.1). The plan was to explode a land mine under the vehicle on its way to Thurles. This was to be a signal to the Irregulars to open fire. They were deployed on both bridges (marked ‘A’and ‘B’ on the map) on the high ground north-west of slight cutting, marked ‘C’ and also east of the objective marked D’ on the sketch. On its way up from Clonmel, the ‘Grey Ghost’ was unmolested as the land mine failed to explode. On its return, it was blocked by a stone barrier which had been erected midway between the two bridges. When the vehicle came to a halt (at point marked E) fire was opened and lasted for about an hour. The besieged soldiers, under the Leadership of Lieut. Quinlan, returned fire mainly using an automatic weapon which was manned by Corporal Tom O’Shea. The crew of the ‘Grey Ghost’ surrendered or as Sean Fitzpatrick says in the book “Recollections of the Fight for Irish Freedom by 3rd Tipperary Brigade” – “They gave up the Ghost”. 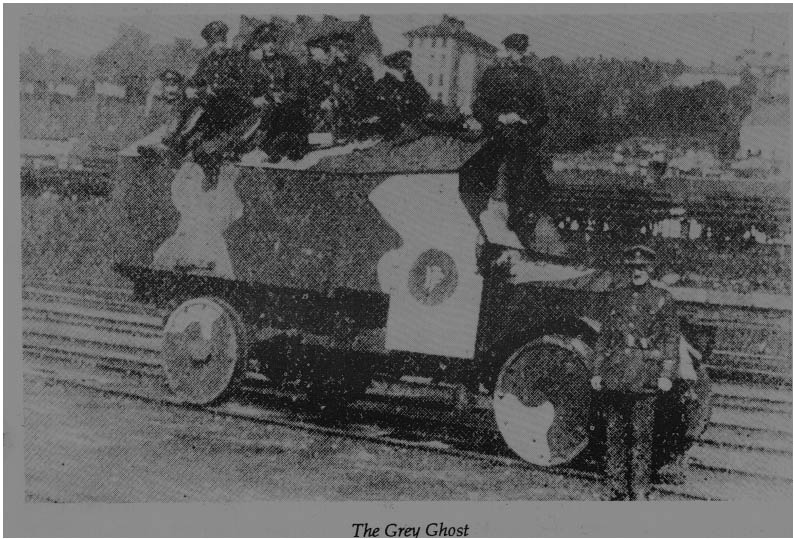 The exchange had ended without casualities on either side. Prisoners were not taken; the only punishment inflicted on the captives being to relieve them of their weapons and ammunition and strip them of their ‘greatcoats’. The Lancia car was set on fire but only partially burned. One of the lamps from the Grey Ghost was taken away by one of the attackers and left at Jimmy Cleary’s forge in High Street, where it remained for some years.

That evening about fifty Free State Troops arrived at the scene and carried out a search of the area without any significant results.

The Commander of the Irregulars was Bill Quirke, who was accompanied by about twelve men, including Sean Hayes, Jimmy Hayes (later shot at Silver fort, Killenaule), George (Executed in 1943 for murder of Deaveroux) and Jimmy Plant. The ambush on the ‘Grey Ghost at Moyglass on 15th October l922, was in many ways a rather unique event. We cannot say that it was a happy event, but it lacked bitterness and indeed it is said to have had a rather unusual outcome: when the ambush was over, both the attackers and defenders adjourned to a public house in Moyglass village, where they drank each others health. (ref History & Folklore of Killenaule/Moyglass)