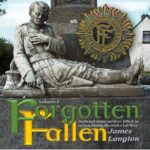 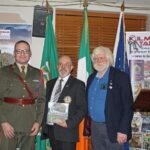 This is the first part in a trilogy on the dead of the Irish Civil War and deals with the National Army/Free State Forces. Part 2 (due in 2022-3) will deal with the Anti-Treaty Forces while Part 3 (due in 2023) will cover the non-military/civilian deaths.

The book is in hardback, contains 400 pages and page size is 210mm x 210mm. The cover is full colour, and the inner pages are all in black and white. The book is copiously illustrated with contemporary photographs and modern photographs of the last resting places of many of the men included.

The heart of the book is the 300 pages of National Army Soldiers who were killed in the line of duty during the Civil War, but seven additional appendices provide information on soldiers who died in other circumstances. There is also a plan layout of the National Army plot in Glasnevin Cemetery and a listing of the men buried there who died during and since the end of the Civil War and those who died on UN duty.

This is a major publication which is essential reading and as a reference work for all who wish to study and understand the Irish Civil War.

Commandant Ayiotis made an excellent speech on the difficulties of commemoration and remembrance of our troubled history over the coming years which we gratefully publish in full below:

It is an honour to be here in the Michael Collins’ Club tonight, and to have been asked to launch The Forgotten Fallen, Volume 1 in the ‘Fallen’ series, by James Langton.

This year we entered the centenary of the War of Independence, which will be followed closely by the centenary of the Civil War, which of course is the subject of this book. In comparison to the War of Independence, how we remember and commemorate the Civil War, as we have gotten used to hearing, will be more ‘difficult’. Personally, as an archivist at least, I think ‘uncomfortable’ is a better term. We have already seen, for example, the discomfort in some quarters surrounding the commemoration of the Soloheadbeg ambush, and so it will be with the Civil War centenaries. There is nothing difficult for the archive in making the documentary evidence of such episodes available, but there is evidently a natural discomfort in confronting it.

The past few years have seen a broadening and opening up of Irish archives, with more Irish people than ever before using them. This has revealed many things to be proud of. What I like in particular is how the stories of ‘ordinary’ men and women who fought for Irish freedom have come to the fore, most significantly through the material in the Military Service Pensions Collection, but also through other archival services such as Dublin City Archives and the National Archives. And this opening up of archives has also revealed uncomfortable truths, and will continue to do so.  Regardless of discomfort or difficulty, remembering and commemorating our nation’s history is important, and in order to do it properly and inclusively a thorough and nuanced understanding of that history is vital. The history of the modern Irish State and the history of Oglaigh na hEireann are inseparable.

In many ways we are still living with the aftermath of the Civil War – we still have partition for example, and the main political parties can trace their origins back to various splits that developed from the Anglo-Irish Treaty. The Civil War was undoubtedly a dark chapter in our history.  Because of this, in my opinion, there is often a temptation to present the history of the Civil War with a certain bias, taking one side or another, in order to support one stance or another on modern political or social matters.

Working at the Archive I have seen records of terrible things done by members of the National Army, just as I have seen records of terrible things done by the Anti-Treaty Forces. Often, terrible things done by one side during the Civil War will be presented to support a present-day agenda – and I am talking about both sides here. But rather than being falsely construed as defining features of either side, these have been the defining features of Civil Wars for as long as humans have been fighting them. In any war, no side ever believes that they’re the ‘baddies’, and to characterise the Irish Civil War as ‘good’ versus ‘bad’ is simplistic and an injustice to everyone. And just as I have seen records of the terrible things, I have seen records of tremendous courage, sacrifice and loyalty. If we are going to properly address the legacy of the Civil War, we need accurate history. And history, if it is to be in any way accurate, depends on good primary sources. So for that reason it is great to see books using these primary sources being published like this one – in this volume presenting the facts of those members of the National Army who gave their lives in the line of duty; in volume 2, those who took the anti-Treaty side but who also died following their own consciences in the defence of the Republic as they believed right; and in volume 3 remembering those non-military people who died during the Civil War, something vital if we are to prevent the glamorisation of this dark period in our history.

So on that note, I would like to thank everyone for their attention and congratulate James on this great achievement. I’m delighted to declare  Volume 1, The Forgotten Fallen, by James Langton, officially launched.