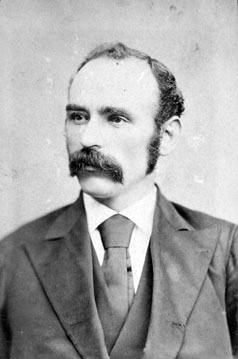 Michael Davitt was born in the village of Straide, Co. Mayo, on 25 March 1846. His father was one of the thousands of Catholic smallholders evicted after the Great Famine. In 1850 the family emigrated to Haslingden in East Lancashire. At eleven years of age he worked at a cotton mill. His right arm was severed by machinery and had to be amputated. Unable to work, he attended the local Wesleyan school and evening classes in the Mechanics’ Institute. He became a typesetter. He was mostly self-taught and learned French and Italian as well as Irish.

Davitt became involved in the Irish Republican movement and joined the Fenians in 1865. He took part in the unsuccessful attack on Chester Castle. In 1868, he was made organising secretary of the Fenians in Scotland and England and was their chief arms purchaser. In order to cover up his revolutionary activities, he became a firearms salesman. In 1870 he was arrested and sentenced to fifteen years in Dartmoor prison on a charge of treason, but he was released on ‘ticket of leave’ after seven years due to the efforts of Isaac Butt, Charles Stewart Parnell, and the Amnesty Association.

Davitt went to America in 1878 and met Clann na Gael leaders including Devoy. He undertook a public lecture tour to earn money and he addressed issues such as the past and present policies of nationalists and what needed to be done to put the national cause on a stronger footing. He called for an end to the landlord system in Ireland and for Irish independence. He discovered in discussions that Devoy’s thinking on the land question was more advanced than his own and he was soon convinced of the merits of Devoy’s ideas about a ‘New Departure’ in Irish politics. He was anxious to return to Ireland to promote the plan to form a movement with the two great aims of self–government and land reform. He returned to Ireland in 1878. This new policy, known as the ‘New Departure’, called on nationalists to back parliamentary representatives who, though not Fenians, would act in the national interest in and outside parliament. It was, at first, treated with suspicion by the IRB and, though no formal alliance between extremists and constitutionalists came about, the combination of agrarian agitation and parliamentary leadership created the politics of Parnellism.

As crops failed and farm prices fell Davitt’s plan became more attractive. A mass protest meeting was organised in Irishtown, Co. Mayo, in April 1879 by local leaders. Davitt played an important part in its organisation but he did not attend. In the worsening agricultural conditions of 1879, Davitt persuaded Charles Stewart Parnell to address the second key meeting in Westport, Co. Mayo, on 8 June 1879 and to become involved in land agitation. Davitt, too, addressed the Westport meeting and called for an end to the evils landlordism and for Irish freedom. Davitt founded the Land League of Mayo, in August 1979, to organise and direct the agitation. Davitt’s role was vital and the leadership he offered in directing agrarian agitation was of profound importance. He believed that the land war could do much for Ireland and that all nationalists would support the abolition of landlordism. He adopted the slogan 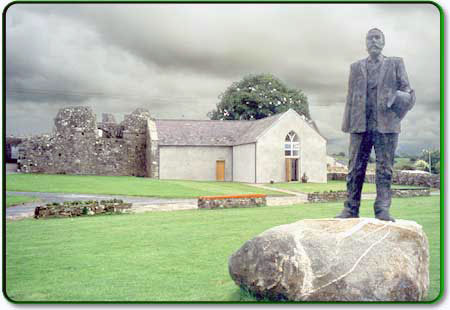 This was to ring as a battle cry throughout the country. Davitt was convinced that Parnell was the only constitutional politician that could help him to achieve his aims and that he should be supported. He persuaded Parnell to take the initiative of turning the Mayo Land League into a national organisation. Parnell, reluctant at first, agreed on the understanding that its programme was one that could be advocated in parliament. Parnell issued a letter accompanied by an ‘Appeal to the Irish race’, written by Davitt, on 29 September 1879 to some public men and began the negotiations that led to the foundation of the Irish National Land League, in Dublin, on 21 October 1879. Parnell became its first president and Davitt its secretary. It was Davitt, however, who had promoted this development and it resulted in a movement under Parnell’s leadership that had Fenian, Clann na Gael, and widespread popular support. It combined, in one great agrarian movement nationalists, from moderates and constitutionalists to revolutionaries, and got strong backing and financial help from the Irish in America.

The Land League undertook a long and bitter land war against unjust rents and evictions. In May 1880 Davitt was expelled from the IRB supreme council. Distress in Ireland was so severe after the poor harvest of 1879 that it seemed that a catastrophe like that of the Great Famine was looming. Davitt considered the distress the tragic culmination of an evil system and his passionate sense of social justice was clear. He was extremely active and he was imprisoned on several occasions because of the Land League’s vigorous prosecution of the Land War. The Land League was also political and here Parnell was dominant. By 1881, the government was pressurised by the League’s popularity to introduce land reform measures to pacify Irish tenants. In 1881 Gladstone’s Land Act was passed. It granted the Land League’s demand, that is, the three Fs—fair rent, fixity of tenure and freedom of sale—but the League fought on. While in prison Davitt became familiar with the ideals of the English socialist movements, some of which influenced his subsequent agrarian demands. He became a keen advocate of land nationalisation, and developed a policy based on an alliance of nationalist and British working-class interests. However, this policy led to an open breach with Parnell in 1884 and failed to attract popular support.

Davitt was elected MP for Meath in 1882 but was unseated by special writ of the House of Commons. Later he was elected to north Meath, in 1892, and unseated; to north-east Cork, 1892, unopposed; east Kerry and south Mayo, 1895–99. Davitt’s denunciation of the Phoenix Park murders (of 6 May 1882) marked his final disillusionment with physical force politics. 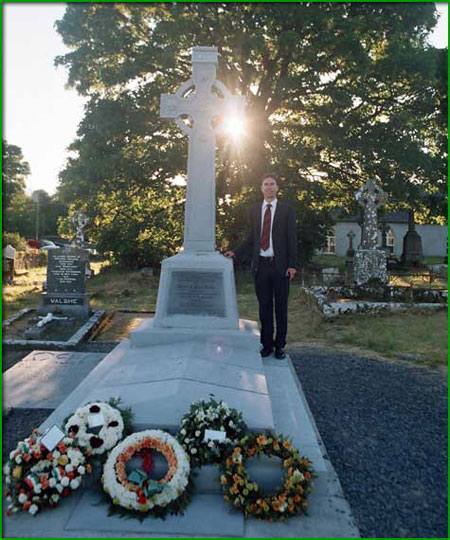 Davitt met Parnell in Avondale in September 1882 and he co-operated with him in setting up the Irish National League which put Home Rule in first place and land-law reform in second. In 1903 Davitt described the founding of the National League as ‘the complete eclipse, by a purely parliamentary substitute, of what had been a semi-revolutionary organisation … the overthrow of a movement and the enthronement of a man’. He may well have had that view in 1882 though he did not express it and he became a member of the organising committee of the National League. Davitt had an appreciation of Parnell’s greatness as a leader though he was critical, at times of Parnell’s policies and detested the cult of Parnellism. He cooperated with Parnell in the Liberal alliance and in the struggle for Home Rule.

When Parnell’s leadership of the Irish Parliamentary Party was under threat in the wake of the O’Shea divorce case (November 1890), Davitt was one of his strongest critics. He called for Parnell’s temporary retirement in an article in the Labour World on 20 November 1890. He was troubled by the divisions in the party and he made valuable contributions to the negotiations that reunited the party in 1900.

Davitt founded a short-lived newspaper in London, the Irish World (1890). This paper collapsed after his resignation. His attempts to organise the agricultural workers into the Irish Democratic Trade and Labour Union met with little success. In 1895 he visited Australia and New Zealand, delivering 70 public lectures identifying the similarities of the Irish land question with that of the Aborigines, Maoris, Kanakas, and Chinese.

When William O’Brien established the United Irish Land League Davitt supported him. He was bitterly critical of the Wyndham Act, 1903. He was also a supporter of non-denominational education.

Davitt’s final years, following his resignation from Westminster on 25 October 1899 as a protest against the Boer War, were occupied with journalism. His books deal with subjects ranging from Anti-Semitism in Russia (a country he had visited) to convict life in Britain. In 1866 Davitt married an American, Mary Yore. They were given a house at Roselawn, in Ballybrack, Co. Dublin, which became known as the ‘Land League Cottage’ as a mark of appreciation for his life-long work fighting for tenants’ rights. He commanded great respect and affection among the majority of Irish people as the ‘father of the Land League’. Davitt died in Dublin on 31 May 1906.