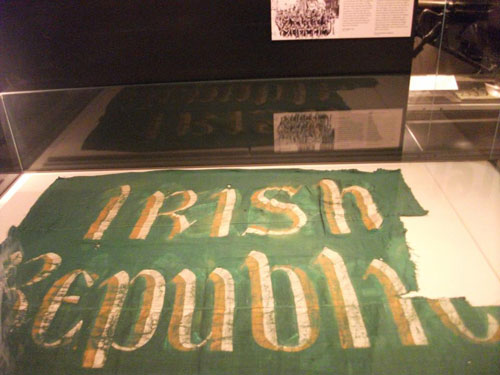 It was an Irish Argentinian who hoisted the Green Flag of the Republic over Dublin’s General Post Office during the 1916 Easter rising.

He was Eamon Bulfin, born in Buenos Aires in 1892, the son of William Bulfin (1864-1910) from Birr, King’s County (now Co. Offaly). William Bulfin emigrated to Argentina at the age of 20 and was a writer and journalist who became editor and proprietor of ‘The Southern Cross’.

He returned to Ireland in 1909 with his wife, Anne O’Rourke, and their children Eamon and Catalina. William’s death in 1910 was a blow to his friend Arthur Griffith and the efforts to launch a Sinn Féin daily newspaper. 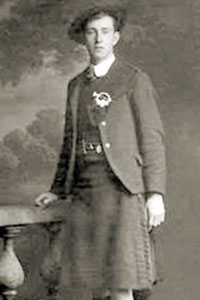 Eamon, in 1909 aged 17 , became a pupil at St. Enda’s, helping Pearse with the younger children. A year or so later, Eamon went on to study at University College, Dublin.

He was a keen GAA member and in 1915 he led the UCD team to win the hurling College Championships (Fitzgibbon Cup). He also became captain of the College’s Irish Volunteer Company.

He responded to the mobilisation orders in 1916 and was under Pearse’s personal command. During the months before the rising, he had been helping with stocking the arms and ammunition in the basement of St. Enda’s.

After the GPO had been seized as the insurgent’s headquarters, James Connolly had asked Seán T. O’Kelly to fetch two flags from Liberty Hall. When Seán T. O’Kelly arrived with them, Max Caulfield, in his book The Easter Rebellion (1964) describes what happened.

‘Here!’ said Connolly to the two Junior Volunteer officers ‘Have these hoisted up on the flag poles.’

What is not mentioned in this book, nor in most accounts of the Rising, is that one of the the Volunteer officers was the Argentinian born Eamon Bulfin who recounted the actions of that Easter Monday 24th April 1916 – The other was a Cousin of Michael Collins, Gearóid O’Sullivan from the Bantry area of West Cork who hoisted the Tri-Colour (see below).

“Eamon Bulfin’s detachment arrived at the Prince’s Street side of the GPO, just in time to see a company of mounted lancers charge down the street with their sabres drawn. The rebels fired on them from the GPO and the Imperial Hotel, killing four men and scattering the rest. Bulfin “did not know where the shots were coming from. In the confusion and noise, nobody seemed to give us any attention at all, and the position was looking critical”. He spotted a side window. “I broke the window with my rifle, and incidentally broke my rifle. Any chaps that were near me, I called them out by name and ‘hooched’ them up the window. Jack Kiely was actually on his hands and knees on the window sill when he was hit by a bullet.”

Once inside, Bulfin reported to Patrick Pearse and was sent to the roof of the building. Up there, he was given the job of hoisting one of two flags. Bulfin was given a green flag with a golden harp and the words “Irish Republic”. “The thing I remember most about hoisting it is that I had some kind of hazy idea that the flag should be rolled up in some kind of a ball, so that when it was hauled up, it would break out.” Looking down from the parapet, he saw that people had begun to loot the shops on the street below.

Eamon Bulfin was sentenced to death by British military court martial after the surrender of the insurgents. However, the fact that he was an Argentine citizen, born in Buenos Aires, saved his life. The Argentine ambassador intervened and, eventually, on March 21, 1917, Eamon Bulfin was deported under Britain’s Aliens Restriction Act of 1914.

The Argentine Government did not want to anger the British Empire, with whom they were already having problems, not the least with their long-standing argument over the sovereignty of The Malvinas/Falklands.

They therefore arrested Eamon Bulfin when he arrived in Buenos Aires and sentenced him to jail for leaving Argentine for the purpose of ‘deserting from military service’. As he was still a schoolboy when he and his family left for Ireland, it seemed the authorities were desperate for an excuse.

When Eamon Bulfin was released in 1919, the General Election in Ireland had resulted in an overwhelming victory for Sinn Féin who, in accordance with their manifesto, made a Unilateral Declaration of Independence making Ireland a republic and set up a parliament in Dublin.

The President of the Republic, Eamon de Valéra wrote to Bulfin in May appointing him the official representative to Argentina.

As Irish Consul, Bulfin was to “inaugurate direct trade between Ireland and the Argentine Republic… to co-ordinate Irish opinion in the Argentine, and to bring it into the Irish demand for a republic.”

Bulfin began work, establishing close contacts with Argentine government officials, Irish Argentine leaders and he launched an Irish Fund to help the cause.

As England moved to arrest all the elected Irish representatives, declaring the Irish Parliament ‘an illegal assembly’, the War of Independence was the inevitable outcome. Bulfin became active in organising the supply of arms and ammunition to the Irish Volunteers.

In 1920, during the county council elections, Eamon Bulfin was nominated in his absence for a seat on King’s County (Offaly) Council. Not only was he elected but appointed chairman of the council. One of the first things the new council did was to agree that the county’s name be returned to its ancient Irish form of Co. Offaly.

Meetings were conducted with the chairman’s seat in the council chamber left empty and with a tricolour draped across it.

With the signing of the Treaty and the establishment of an Irish State in 1922, Eamon Bulfin was finally allowed to return to Ireland where he set up home in his father’s native Derrinlough, Birr, Co. Offaly. He married Nora Brick and was to die in Offaly in 1968.

His sister, Catalina, also born in Buenos Aires in 1901, had become secretary to Austin Stack (1880-1929). Stack was elected to the Dáil in 1918 and became Minister for Home Affairs from 1920-22. He accompanied deValéra to London for the initial Truce talks but became a leading opponent of the terms agreed by Collins.

Catalina Bulfin married Seán MacBride (1904-1988), the Nobel Peace Prize winner, former Chief of Staff of the IRA, Irish Minister for External Affairs (1948 –52), secretary of the International Commission of Jurists, founder member of Amnesty International and Assistant General Secretary of the United Nations. Catalina MacBride died in 1976 and is buried in Glasnevin. 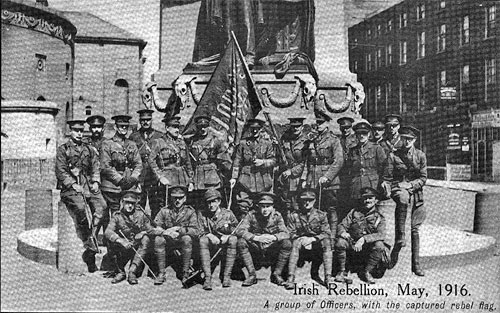 Gearóid O’Sullivan (1891-1994) was a native of Skibbereen, County Cork and a second cousin of Michael Collins. He qualified as a Primary Teacher in 1912 and was appointed to St Pauls N.S. Phibsboro, Dublin. He graduated with an MA from UCD in 1915 He followed his cousin into the Irish Volunteers, the IRB and the Gaelic League. During the Easter Rising he served in the G.P.O and was the youngest officer to serve there. He was given the honour to raise the tricolour over the GPO. Following the rising he was interned in Frongoch, Released in Dec of 1916. In 1917 he became Professor of Languages in Knockbeg College Carlow.

While there he continued his involvement with the Volunteers. Before long O’Sullivan was appointed OC of the 1st Battalion Carlow Kildare Brigade which was centred in Carlow town, but included Bagenalstown and Leighlinbridge. The active co-operation of the College President made it possible for O’Sullivan to be so involved in the local Volunteer movement 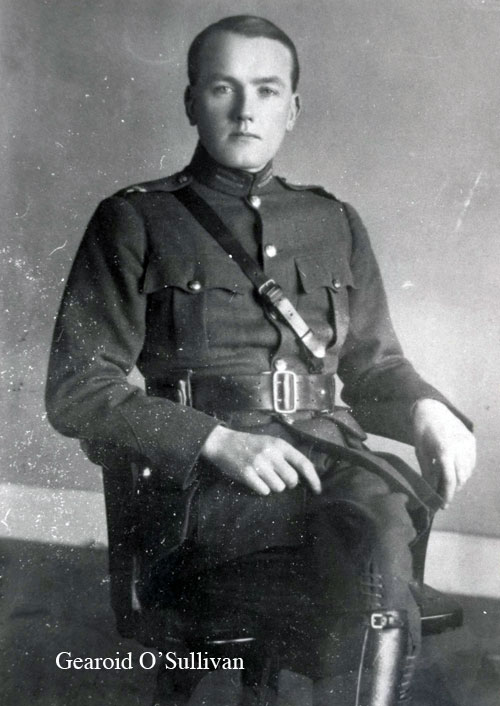 When O’Sullivan was subsequently tried for making a seditious speech in his hometown of Skibbereen, Fr Doyle (College President) travelled south to give a character reference for him. It was to no avail however as O’Sullivan was found guilty and sent to prison. On his release he resumed his teaching job in Knockbeg College, all the time retaining an active involvement with the Volunteers.

In 1919 he was summoned to Dublin by Michael Collins to become the Adjutant General of the Volunteers. He was one of the Officers commanding the Dublin Brigade of the Volunteers from whose ranks members of the Famous Squad were drawn. On creation of the National Army in Jan 1922 Gearoid O’Sullivan was appointed Adjutant General of the Irish Forces. He left military life in 1923 to further his career as a teacher and politician.

There was a £3,500 bounty on his head during the War of Independence. – (Photo of Gearoid O’Sullivan kindly donated to the site by Cathy Cahalane)

In 1919 he was elected to the Second Dáil Éireann, unopposed as a Sinn Féin TD for the constituency of Carlow /Kilkenny with W.T. Cosgrave. He was re-elected at the 1922 General Election as a Pro-Treaty Sinn Féin TD. During the Civil War he served as Adjutant General of the Irish Free State Army. He did not contest the 1923 General Election as he had been elected to Seanad Éireann in 1922. In Oct 1922 he married Maud Kiernan sister of Kitty Kiernan, Michael Collins sweetheart (this was planned as a double wedding of the Kiernan sisters to Gearoid and Michael). They had four children, Fr. Gearoid Jr (a Vincentian priest and noted academic.). Sibeal, Ann and Sr. Trina.

In 1927, after the assassination of the then Minister for Justice Kevin O’Higgins , O’Sullivan contested the resulting by-election in Laois/Offaly in August that year, he retained the seat for Cumann na nGaedhael. He was re-elected at the next three general elections for the party in the Dublin County constituency. He contested the 1937 General Election under the Fine Gael banner but failed to be elected. In 1938 he was elected to the Seanad, was unsuccessful in the 1939 Seanad Election. He qualified as a Barrister-at-law in that year and commenced a legal career. He died on Good Friday, 25 March 1948 and was given a State Funeral the following Easter Monday – exactly 32 years after the Easter Rising.