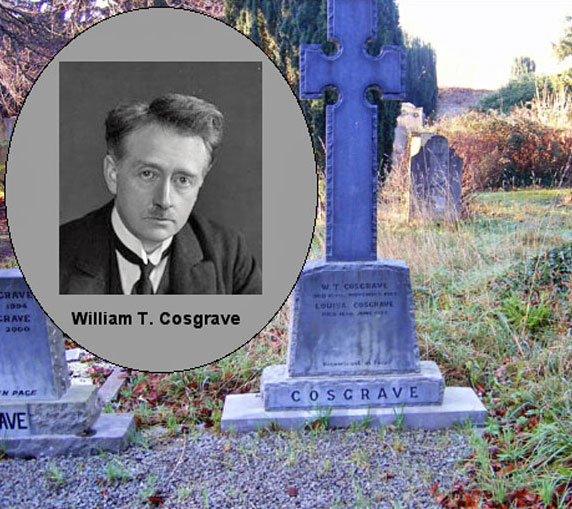 The first President of the Executive Council of the Irish Free State 1922 to 1932. Fine Gael leader 1934 to 1944, (Newspaper Report) – Former taoiseach Liam Cosgrave last night recalled how the State was built from scratch with “no outside money” as he unveiled a plaque in Dublin at the birthplace of his father.

WT Cosgrave, first president of the Executive Council of the Irish Free State from 1922 to 1932, helped to set up Ireland’s policing, military and diplomatic corps, but was also “quite ruthless” in defending what he saw as the will of the people, his son remarked.

Mr Cosgrave (93) was speaking at Kenny’s Lounge on James’s Street, the public house where – under different ownership – his father was born on June 6th, 1880. Taoiseach Enda Kenny (no relation of the current proprietors) was among the large, cross-party contingent of politicians at the event, which was organised by the Kilmainham and Inchicore Heritage Group.

Since leaving the Dáil 32 years ago, Mr Cosgrave has carefully avoided commenting on politics but there was a contemporary resonance to the tribute he paid to his father and the fellow state-builders of his era. “There was no outside money; it’s not like nowadays you can get a bit from Europe. All the money was provided from this State and the people responded.”

Mr Cosgrave recalled how his father took part in the 1916 Rising, escaped a death sentence and “when Griffith died and Collins died he was appointed to succeed them and he had to undertake the difficult task of governing in the midst of a civil war.

“He was quite ruthless and clear in his expressions on that. He said the will of the people is going to be made to prevail.”

Controversially, he ordered the execution of four irregulars in response to the murder of Cork TD Sean Hales in December 1922. “Of course there was an outcry against it. It was quite unusual in every respect. But it was the last time a TD was shot . . . until later, Kevin O’Higgins [in 1927],” Mr Cosgrave recalled.

In a 25-minute speech, delivered largely unscripted but precise in detail nonetheless, he also paid tribute to his father’s work on the North, suggesting he was ahead of his time when he organised a review of the Border arrangement in 1925 under the provisions of the Anglo-Irish Treaty.

“The other area in which there were slow learners was the Senate,” he continued to some laughter, and a bit of squirming from Seanadóirí in the audience.

The Taoiseach said it was a privilege to be in the company of someone as “articulate and as wise” as Mr Cosgrave.

A similarly humbled proprietor Michael Kenny told the audience that it was “increasingly hard to fill a pub these days – so Mr Cosgrave any Friday or Saturday night you are more than welcome”.