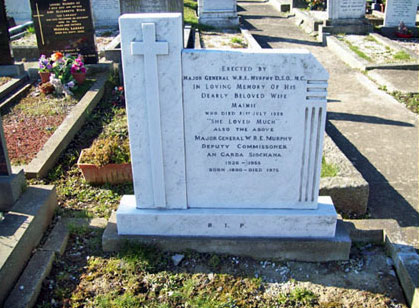 William Richard Murphy was born in County Wexford in 1890 but was orphaned at an early age and brought up in Belfast by an elder cousin. He graduated in education in Dublin and returned to Belfast to teach on the Falls Road. When the First World War broke out he joined the British army as an officer cadet through Queen’s University officer training college and gained his commission in April 1915. He was, at his own request, posted to the 1st battalion South Staffordshire regiment. He first saw action in the closing stages of the battle of Loos in October 1915. However, barring brief spells in the trenches and despite being wounded by shellfire, he did not see serious action until 1 July 1916, the first day of the battle of the Somme. In the assault Murphy was given the task of leading the bombing company to clear the fortified houses in the village of Mametz. Of the battalion’s 21 officers who had gone over the top that morning, by the end of the day six were dead and a further five were wounded, though Murphy survived unscathed.

Murphy was to see many more battles on the Western Front in 1916, such as High Wood and Delville Wood (a particularly hideous affair) in late August, then later in the year on the Douve River and at Beaumont Hamel. In 1917 he was promoted to captain and was awarded the Military Cross for service in the Somme battles. During 1917 he was again in action at Bullcourt in April and then at the third battle of Ypres, another bloody fiasco in which the battalion took heavy casualties. The year 1918 saw Murphy serving in Italy with his battalion, and in June he was promoted from major to lieutenant colonel to become the commanding officer of the 1st battalion South Staffordshire regiment. This was a singular honour for a young Catholic Irishman to be given: the command of a battalion of mostly English soldiers.
On 27 October the British 10th Army took part in the final offensive of the war in Italy, the battle of Vittoro Veneto. This involved a direct assault across the Piave, a wide, fast-flowing river in Venetia across which the Austro-Hungarian army was entrenched. Murphy’s battalion was one of those tasked with crossing over and taking the far bank by direct assault. Looking at the staff plan he was given to follow, he realised that it would never work. In liaison with the commanding officer of the lead battalion he tweaked the plan so that both battalions would launch their assault at the same time, thus maximising their impact. This tactic paid off and his battalion went on to capture a number of villages and eventually took prisoner over 2,800 officers and men plus much weaponry. That was his last battle of the war. For his actions in this battle Murphy was awarded the Distinguished Service Order, his citation stating that:

‘He handled his battalion with conspicuous gallantry and skill . . . Throughout the operations he set his men a splendid example of fearlessness and dash, which materially helped to ensure the great success achieved.’

In 1919 Murphy resigned from the British army and returned to Ireland, where he took up a position of schools inspector based in Derry. On the outbreak of civil war in the South he was head-hunted by Michael Collins to take up a position in the new Free State Army.

He was given command of troops under the overall direction of Eoin O’Duffy and organised the attacks on Republican positions in and around Bruree and Kilmallock, Co. Limerick, during September 1922. After the withdrawal of the Republican forces from there and following the landings in Kerry, he was dispatched to Tralee as the commanding officer of the Free State Army in County Kerry, a position he held from late September until early January 1923. A difficult post, he did the best he could to restore order without being too harsh. He spared the lives of four IRA men sentenced to death just before he left Kerry for the last time.

He was then transferred to Dublin to the operations section, but when his orders were not carried out he expressed a wish to resign. To avoid controversy he was instead put in charge of writing training manuals, which was obviously a dead-end position.
However, with the ending of the civil war another opportunity came his way, as Kevin O’Higgins wanted someone reliable to take over the Dublin Metropolitan Police. Murphy was appointed chief commissioner in May 1923 and led the force until it was amalgamated with the Garda Síochána in 1925. The DMP were totally demoralised and he built up their confidence again under very difficult circumstances. He was also involved, with others, in the transformation of the various semi-secret police agencies then in existence into what was eventually to become the Special Branch of the Garda Síochána. This followed his suggestion to O’Higgins in 1924 for the establishment of a ‘Special Branch to deal with Bolshevik, Anarchist and Communist crime masquerading under political disguise’. His proudest moment, however, was in the closing months of his commissionership of the DMP, when he helped Frank Duff of the Legion of Mary to close down the last brothels in the notorious ‘Monto’ red light district of Dublin. Duff appealed directly to Murphy to ensure that the police ended this civic embarrassment once and for all.

In 1925 Murphy was appointed a deputy commissioner of the Garda Síochána under his old military comrade Eoin O’Duffy. He had a great deal of respect for O’Duffy and overall they had an excellent relationship but one that was by no means untarnished by petty disputes. He recalled that the general ‘had many virtues but some faults’. Murphy was also a friend of Kevin O’Higgins and was grief-stricken when he was assassinated in 1927. He had been in charge of O’Higgins’s security arrangements before the amalgamation of the two forces, and he ‘was conscious that if any man was going to be assassinated it would be Kevin’.

Over the years that followed Murphy was to hold many of the key positions within the police, but owing to the bitter legacy of the civil war he was never awarded the position of commissioner. However, during the Second World War de Valera asked him to organise an auxiliary force to back up the army and Garda. This force soon numbered over 65,000 men but in late 1940 it was split in two, with one section becoming the Local Defence Force (LDF), under army control, and the other the Local Security Force (LSF), remaining under Murphy’s command. However, the LSF was always the poor relation of the state’s security services and was disbanded at the war’s end without ceremony.

After the war Murphy was put in charge of ‘C’ (Crime) Branch and he published his Manual of criminal investigation, which remained in use for many years. He ended his police career back in charge of the Dublin Metropolitan Area. Throughout his career Murphy was known to all ranks as ‘the general’, though when he retired in 1955 he still held the same rank as the day he joined the force 30 years before!

Murphy was an active organiser of amateur boxing at both national and international level. He helped many aspiring boxers in the ranks of the Garda to pursue their interest in the sport, such as ‘Lugs’ Branigan, and he was, along with his wife and others, instrumental in having the National Stadium built.

Murphy’s career encompassed service to the state under different regimes. He appears to have made the transitions without any qualms, most probably because he put adherence to professional conduct before any political beliefs he may have held. He died in 1975 and was given a state funeral.