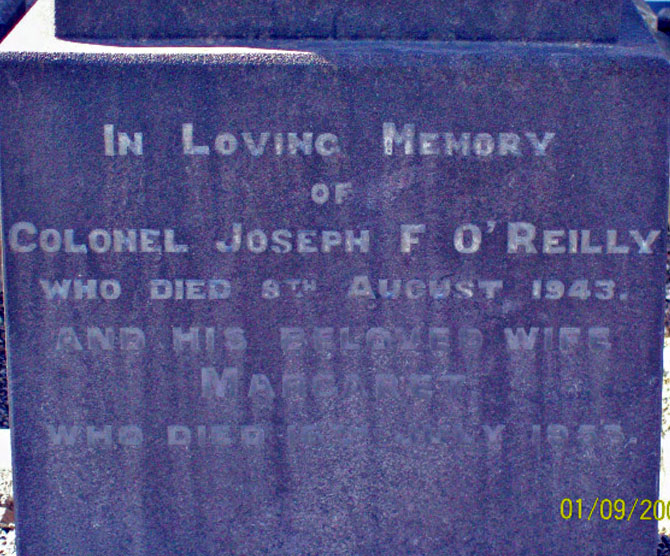 Margaret Mc Carthy nee O’ Reilly was the sister of Col. Joe O’Reilly.Margaret was born in Limerick in 1894 and Joe was born in Bantry, Co. Cork in 1893. Joe moved to London in 1911 at the age of 15 and took up employment as a postal official in the Post Office Saving Bank in West Kensington. According to Michael Collin’s first biographer, Piarse Beaslai, Collins had gone to London in July 1906 to work in the Post Office Savings Bank , and in 1911 he “first made the acquaintance of one who was to play a very big part in his after- life ”. This was Joe O’Reilly, “the faithful companion and right-hand man of Michael in all his labours and perils in Ireland”. The two got to know each other “through athletic interests” outside working hours. (1)

About four years after they first met, “the two friends returned to Ireland with a party of other London Irishmen who were determined to take part in the forthcoming 1916 Rising”. (2) They fought side by side in the GPO in Dublin and were interned together after the rising. (3 ) Immediately after the rising, Joe was among a batch of prisoners brought to Richmond Barracks in Dublin. Some 300 of these were then marched off to a boat for deportation to England. Michael Collins was among this 300, as was Joe. They were taken to Stafford Jail in England, where they were detained foe two months before being moved to Frongoch internment camp in Wales.(4 ) While at Frongoch both Michael Collins and Joe kept up their interest in athletics. According to Frank O’Connor, author of the book the Big Fellow, Collins was very good at the high jump, hammer throwing and the hundred yards. “ O’Reilly describes how he almost won the hundred yards when he suddenly saw Collins go past him; as he did, he hissed gleefully, all his face a grin of delight: Ah, you whooer, you can’t run!’’’(5)

Joe was released from Frongoth sometime before Collins. Most of the internees were let out under a general amnesty just before Christmas 1916. According to the author Piaras Beaslai, Joe went home to Bantry for around two months and then returned to Dublin in early March 1917, where he “commenced that close association with Collins and his work until the death of the chief”. By this time, Collins had become secretary of the Irish National Aid Association, an organisation set up to provide for the dependents of those killed in the rising and those who had been sentenced to penal servitude afterwards. Collins employed Joe as his assistant in early 1917 “and then began a close association which was to last until the tragic death of Collins”. (6)

According to Beaslai the nature of the working relationship between Joe and Michael Collins became more intense around late spring or early summer 1918. Collins gave up the position of secretary of the Irish National Aid Association as he became more deeply involved in the reorganised Irish Volunteer movement and in the revitalised Irish Republican Brotherhood (IRB). In October 1917 he became Director of Organisation of the Irish Volunteers. By the spring of 1918, he had also begun to act as Adjunct-General and indeed Quartermaster-General of the volunteers. He badly needed a capable assistant according to Beaslai. “He already had Joe O’Reilly as an assistant, but in a different capacity. I do not think Joe’s job was ever defined. He had to do a thousand things; but the nearest definition I can find for his position is confidential messenger and aide-de-camp.”(7)

David Neligan, from Templeglantine, co. Limerick, worked for the G-division (detective division) of the Dublin Metropolitan Police. He decided to leave the police in May 1920 but an acquaintance persuaded him stay and help Collins from within Dublin Castle. Neligan met Austin Stack, Minister of Home Affairs in the first Dail, at the Clarence Hotel, where he Neligan was staying. Austin Stack told Neligan that Collins wanted to meet him. Joe O’Reilly turned up.

This is what Neligan later wrote about O’Reilly:

I knew Joes appearance well, indeed all the G-men did. He could be seen at all hours pedalling an old bicycle furiously. The G-men never attached much importance to Joe, but they were wrong. He was Collins’s confidential courier and often carried important dispatches. As Frank O’Connor said in his readable book, The Big Fellow, Joe lived only for Collins. Like him, he was a Cork Man, a thin, eager, sparely built youth with lively movements, a very dynamo of energy. He was also innocent, ingenuous and intensely religious; altogether an admirable person. A poor labourer, he had given up his work to take on a life of drudgery far worse than labouring, for Collins was a hard taskmaster, sparing none, himself least of all. (8)

The night before Collis’s departure for Cork (on his last fatal journey), he went to bed at 7.30. He was suffering from a bad chill. O’Reilly treated him with poultices and then went for oranges and made him a drink. Collins said that was grand. “Encouraged by these, the first words of gratitude that had passed between them, O’Reilly went so far as to tuck him in for the night. But this was too much. Gathering all his strength, Collins bawled: ‘Go to hell and leave me alone!’’’

O’Reilly woke at six the next morning and, “moved by some impulse, rushed to the window. Collins was standing outside on the steps waiting for the armoured car to arrive. He wore a small green kitbag over his back, his head was bent in gloomy meditation, and O’Reilly thought had had never seen so tragically dejected a Collins as this man who, thinking himself unobserved, let himself fall slack in the loneliness and silence of the summer morning. The instinct of devotion was strong in O’Reilly. He pulled on his trousers and, indifferent to rebuffs, dashed downstairs to say goodbye, but the car was already gone. (9) He was not with Collins on his last fatal tour because other duties prevented him from going. By this time, i.e., august 1922, he had become a colonel in the new Irish army. (10) Michael Collins was shot dead at Beal Na Blath on 22 August 1922.