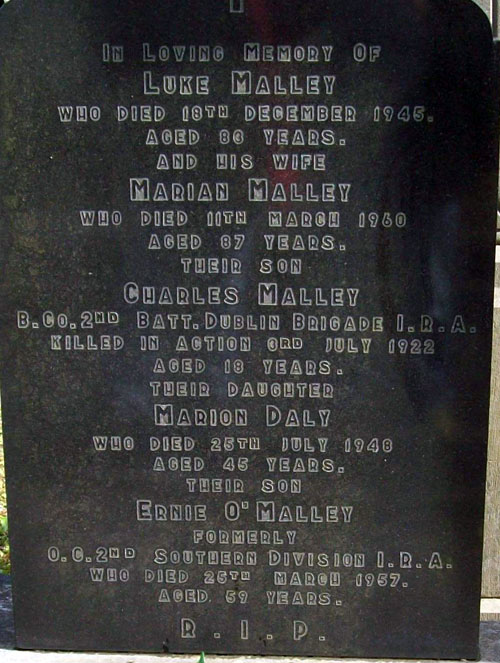 Ernie O’Malley was born in Castlebar, Co. Mayo in 1897. O’Malley was studying medicine at University College Dublin when the Easter Rising convulsed the city. After the Rising, O’Malley became deeply involved in Irish republican separatist activism, a fact he had to hide from his family, who had close ties to the establishment. He left his studies and worked as a full-time organiser for the IRA from 1918 on, work that brought him to almost every corner of Ireland.

He was captured by the British in Kilkenny in December 1920 and having undergone several beatings in Kilmainham Gaol in Dublin, and in severe danger of execution, he escaped two months later. In early 1921 O’Malley was placed in command of the IRA’s Second Southern Division in Munster, giving him responsibility for IRA operations in Limerick, Kilkenny and Tipperary. The British were aware of his role: while in custody under the alias “Bernard Stewart”, he had seen a memorandum referring to a ‘notorious rebel and officer of the IRA’ named “Ernie O’Malley” whom they were very anxious to capture.

O’Malley objected to the Anglo-Irish Treaty that formally ended the “Tan War”, opposing any settlement that fell short of an independent Irish Republic. He was one of the anti-Treaty IRA officers who occupied the Four Courts in Dublin. O’Malley was appointed assistant chief of staff in the anti-treaty forces. He was captured again after a shoot-out with Free State troops in the Ballsbridge area of Dublin city on 4th November, 1922. In one particular incident, O’Malley was severely wounded, being hit over twenty times – three bullets remained lodged in his back for the remainder of his life. Fate was to intervene as the surgeon who attended to O’Malley was a former medical college classmate, and overstated the seriousness of the prisoner’s wounds, saving O’Malley from execution by the Free State – whose policy by that time was to execute Anti-Treaty fighters captured in possession of weapons.

During this period of imprisonment, O’Malley went on hunger strike for forty-one days, in protest at the continued detention of IRA prisoners after the war. While on hunger strike, he was elected as a Sinn Féin TD for Dublin North in the 1923 general election. An internationally recognised writer, O’Malley’s books include On Another Man’s Wound and The Singing Flame.

As befitting a celebrated figure of the Anglo-Irish War, O’Malley was given a state funeral after his death in 1957. A sculpture of Manannan mac Lír, donated by O’Malley’s family, stands in the Mall in Castlebar, County Mayo.