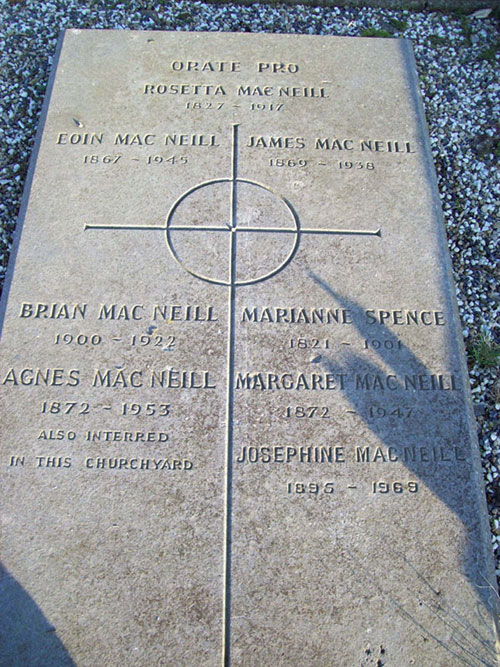 Eoin MacNeill (1867-1945) was born of middle-class Catholic parents at Glenarm on the Antrim coast. He was educated at St Malachy’s College, Belfast and gained a degree from the Royal University of Ireland. In 1893, together with Douglas Hyde and others he founded the Gaelic League, an organisation devoted to the preservation of the Irish language, literature, and traditional culture. He was the first secretary of the Gaelic League, and edited its influential journal An Claidheamh Soluis (the Sword of Light) for a period. A brilliant linguist and historian, MacNeill revolutionised Celtic studies, establishing that the sources did not extend beyond the fifth century and that accounts of earlier periods were based on late fabrications. In 1909, he became professor of early and medieval Irish history at University College, Dublin.

McNeill advocated the formation of a national volunteer force on the lines of the Ulster Volunteer Force. The organisation was established in Dublin on 25 November, its ostensible purpose being to safeguard Home Rule; a number of the executive, however, were members of the Irish Republican Brotherhood who aimed at using the Volunteers to gain full independence, which indeed came to pass, most of the participants in the 1916 Rising being members of the Volunteers. MacNeill, also a separatist but moderate in tone and well regarded publicly, was given the role of chief of staff.

Under MacNeill’s direction recruitment proceeded apace, the numbers eventually reaching 170,000. He also encouraged the creation of a complementary women’s force, Cumann na mBan, in April 1914. As chief of staff, he was involved in planning the importation of the Howth arms. Following the split in September 1914 and the defection of the vast majority of members to Redmond, the remaining Irish Volunteers, numbering about 10,000 and mainly located in Dublin, continued under MacNeill’s leadership. Many in this new and trimmed-down force of Irish Volunteers had little regard for Home Rule, the majority being committed republicans.

MacNeill’s strategy was to organise an insurrection if there were adequate reasons and when circumstances seemed favourable; in the meantime, the Irish Volunteers should be fully armed, trained, and held in readiness to counter any attempt to disarm the organisation, impose conscription, or abandon Home Rule. Some of the IRB faction in the leadership, however, planned an insurrection for the more immediate future. It organised routine manoeuvres for Easter Sunday 1916 as a cover for an insurrection throughout the country. Learning of this on Easter Thursday, MacNeill confronted Patrick Pearse, one of the IRB ringleaders, telling him that he would not allow ‘a half-armed force to be called out’. Later, however, Pearse, Thomas MacDonagh and Seán MacDiarmada allayed his fears, informing him of the imminent landing of a German ship with substantial quantities of arms at Fenit, Co. Kerry. When it transpired on Saturday evening that the ship had sunk and the arms were lost, MacNeill countermanded the order for manoeuvres the following day.

As a result of MacNeill’s countermand, the 1916 Rising was almost entirely confined to Dublin; even there, the numbers were only about a quarter of what they might otherwise have been. The countermand probably did not materially affect the outcome: even the entire Irish Volunteers force, as it then was (10,000 men), could not have withstood the military might which would have been deployed against it. In the event, MacNeill’s action probably saved many lives. On the other hand, if it were not for the countermand, the British might well have prevented the Rising from taking place, thus ensuring that there was no loss of life; once they believed that the manoeuvres were off the British became complacent and in effect allowed the Rising to go ahead. MacNeill took no part in the Rising. Nevertheless, he was tried by court-martial and sentenced to penal servitude for life; he was released under amnesty in June 1917.

March 3rd 2014. One hundred years ago today, Eoin MacNeill, professor of early and medieval history at UCD and one of the leading lights of the Irish language revival movement, published an article entitled The North Began in An Claidheamh Soluis, the newspaper of the Gaelic League. It called for the formation of an Irish Volunteer force to emulate the Ulster Volunteer Force established in January 1913. MacNeill was subsequently approached by Irish separatists associated with the Irish Republican Brotherhood (IRB) and asked to take the lead in forming the Irish Volunteers. It was launched in Dublin on 25 November 1913, with MacNeill as commander-in-chief.

This was a period of growing militancy and scepticism about parliamentary methods on the part of a determined minority, failure to find a solution to unionist opposition to Irish home rule, nationalist distrust of British politicians’ determination to see it introduced, and despondency about the limits of what was achievable through cultural nationalism alone. The formation of the Volunteers marked a significant increase in political temperature, but there was also vagueness about its aims and disagreements about its methods and who should control it, which had a profound impact on its direction and on the standing and legacy of MacNeill.The third Home Rule Bill had been introduced in April 1912 and was expected to come into force in the summer of 1914 and the Irish Volunteers was ostensibly formed to ensure it would be implemented, but what did that mean in practice? MacNeill characterised the Volunteers as a defensive rather than defiant organisation: “the Irish Volunteers, if they are a military force, are not a militarist force, and their object is to secure Ireland’s rights and liberties and nothing else”. This was interpreted in different ways, and the Volunteers, eventually numbering roughly 150,000, was a catch-all group; of the 30 men selected to form its provisional committee, most were affiliated to other organisations and 12 belonged tothe IRB.With Home Rule not yet on the statute books, John Redmond, leader of the parliamentary nationalists, needed a strong card to play and he found it in the Volunteers: it was in the national interest, he maintained, that the movement “should be a united one and under a single guidance”.
Dilemma
It was also in his interest, and jealousy of the popularity of the Volunteers had begun to bite. MacNeill’s dilemma was that accepting Redmondite control  could split the movement, but he acted unilaterally in dealing with Redmond and capitulated to the demand that 25 of Redmond’s representatives sit on the provisional committee. The IRB was livid, but despite his seeming success, Redmond was not in control of key decisions; the Howth gun-running in July 1914, when 1,500 rifles were landed for the Volunteers, for example, was organised without his knowledge.With the outbreak of the Great War, Redmond appealed to individual Irish Volunteers to join the war effort as a moral imperative. MacNeill accused him of mental and moral corruption and insisted British parties were conspiring to stop Home Rule, a defeat that only the Irish Volunteers could prevent.A split ensued, with Redmond supported by a majority of Volunteers, by a ratio of 15 to one, now termed the National Volunteers, while MacNeill retained command of the minority, keeping the original title.For all his anger and accusations at this time, and despite the postponement of the implementation of Home Rule due to the war, MacNeill, though not a pacifist, did not believe an Irish Volunteer uprising was feasible or justified, as it would lead to suppression of the organisation and abandonment of Home Rule. His logic, as enunciated in February 1916, was clear; the only justification for rebellion would be “deep and widespread popular discontent”, but “no such condition exists in Ireland”.His opponents believed the defensive strategy left Britain in the driving seat, but MacNeill was reluctant to confront them for fear of more splits. The IRB operated surreptitiously under the cloak of the Volunteers, laying plans for a rebellion, and after discovering its deception, MacNeill issued a countermand to the order for Volunteers to mobilise on Easter Sunday 1916. For many, it was this decision that defined him and his legacy.By the 1960s and 1970s, sympathisers sought to rehabilitate his reputation; historian FX Martin insisted he was not just a figurehead or “front” behind which the radicals plotted. But MacNeill had admitted to nationalist MP Stephen Gwynn in 1914 “my duty for the future lies in the line of study and teaching . . .”.

Regardless of the effectiveness of his leadership, MacNeill’s decisive role in the formation of the Volunteers is a significant legacy – and given that the Volunteers metamorphosed into the IRA that fought the War of Independence, his stance on violence is particularly worthy of assessment.

He insisted in February 1916 “what we call our country is not a poetical abstraction . . . it is our duty to get our country on side and not be content with the vanity of thinking ourselves to be right and other Irish people to be wrong”. That contention went to the heart of the controversies of nationalist Ireland a century ago and MacNeill’s 1913 initiative and what followed need to be seen in the context of different and evolving concepts of Irish nationalism; definitions of loyalty and legitimate violence were contested during this period of multiple allegiances and the outbreak of the Great War complicated them further.

In relation to his role in the Volunteers, these are the lenses through which we should view MacNeill, his dilemmas and his legacy. – Diarmaid Ferriter is professor of modern Irish history at UCD