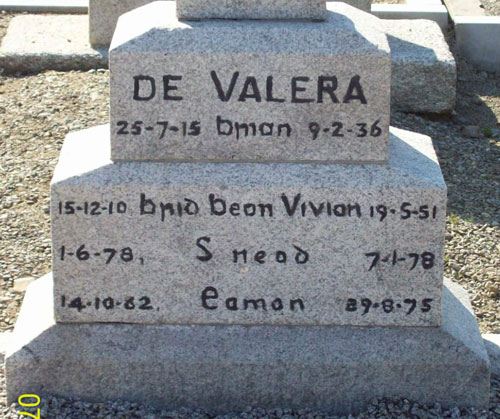 Eamonn De Valera was born in New York City in 1882 to an Irish mother; his parents, Catherine Coll (subsequently Mrs Wheelwright), an immigrant from Bruree, County Limerick, and Juan Vivion de Valera, a Cuban settler and sculptor of Spanish descent, were reportedly married on 18 September 1881 at St. Patrick’s Church in Jersey City, New Jersey, however, archivists have not located any such marriage certificate or any birth, baptismal, or death certificate information for anyone called Juan Vivion de Valera or de Valeros, an alternative spelling. On De Valera’s original birth certificate, his name is given as George De Valero and his father is listed as Vivion De Valero. The first name was changed in 1910 to Edward and the surname corrected to de Valera.

De Valera’s supporters and detractors argue about de Valera’s bravery during the Easter Rising. His supporters claim he showed leadership skills and a meticulous ability for planning. His detractors claim he suffered a nervous breakdown during the Rising. According to accounts from 1916 de Valera was seen running about, giving conflicting orders, refusing to sleep and on one occasion, having forgotten the password, almost getting himself shot in the dark by his own men. According to one account, de Valera, on being forced to sleep by one subordinate who promised to sit beside him and wake him if he was needed, suddenly woke up, his eyes “wild”, screaming, “Set fire to the railway! Set fire to the railway!” Later in the Ballykinlar internment Camp, one de Valera loyalist approached another internee, a medical doctor, recounted the story and asked for a medical opinion as to de Valera’s condition. He also threatened to sue the doctor, future Fine Gael TD and minister, Dr. Tom O’Higgins, if he ever repeated the story.