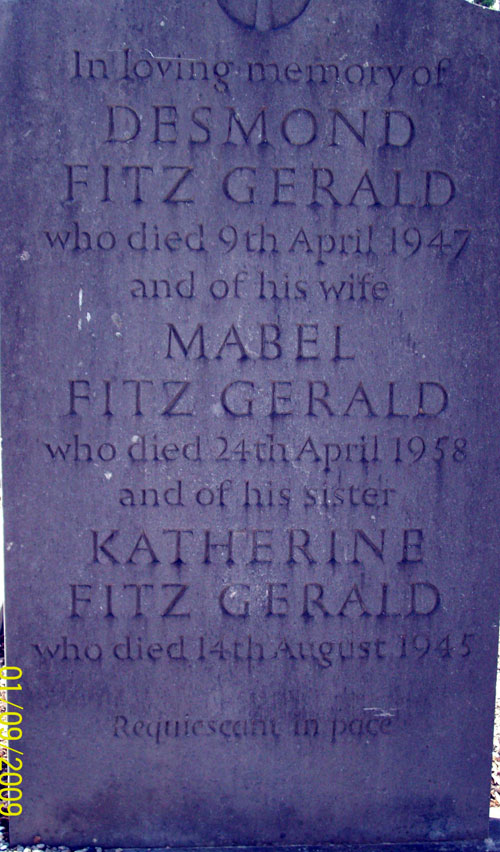 Desmond FitzGerald was born Thomas Joseph FitzGerald in London in 1888. His parents were Patrick Fitzgerald (1831- ), a labourer from south Tipperary, and Mary Anne Scollard (1847- ) from Castleisland, County Kerry. He changed his first name as a teenager to the more romantic “Desmond”, and first visited Ireland in 1910.

In 1911 FitzGerald married Mabel Washington McConnell (1884- ), a daughter of John McConnell, a whiskey salesman from Belfast, and granddaughter of a Presbyterian farmer near the city. Educated at Queens University Belfast, she shared an interest in the Irish language and met Desmond in Dublin at a language seminar. They lived in France until moving to Kerry in March 1913. During this period he became involved with the Imagist group of poets.

He joined the Irish Volunteers in 1914 and organised a Volunteers group in County Kerry. In 1915 FitzGerald was imprisoned for making a political speech. He was later expelled from Kerry and moved to County Wicklow.

He fought at the General Post Office during the 1916 Rising and was imprisoned after the surrender.FitzGerald’s memoir of the 1916 rising inside the GPO mentions the sudden and unexpected mobilisation, followed by a description of conditions in the GPO, the rebels’ headquarters.

While many accounts place the rising as a form of blood sacrifice, FitzGerald discussed its wider rationale with the leader Patrick Pearse, and with Joseph Plunkett who had travelled to Germany in 1915 for assistance. They expected that Germany would win the First World War and that a rising of at least three days would allow Ireland to take a seat at the peace conference. Though declaring an Irish Republic in 1916, they considered it would probably be necessary to invite the Kaiser’s youngest son Joachim to reign a reformed kingdom of Ireland after the war, where Irish would again become the vernacular.

He was released in 1918 when he was elected as a Sinn Féin MP for a south Dublin constituency. Following the assembly of the First Dáil in 1919, FitzGerald was appointed Director of Publicity for Dáil Éireann, editing the Irish Bulletin. During the Irish War of Independence (1919-21) the Bulletin managed to publicise the aims of the Irish Republic to the wider world with increasing success, and removed the likelihood of the conflict being widened, leading to the truce of July 1921. He was arrested again in March 1921, but was released following the truce. He was one of the TDs who were unsuccessful in persuading Eamon de Valera to join the negotiators of the Anglo-Irish Treaty that was signed on 6 December

He supported the Treaty and became the first Minister for External Affairs of the Provisional Governments that in 1922 formed the Irish Free State. He represented the new state at the League of Nations and at Imperial Conferences. In 1927 FitzGerald became Minister for Defence. Following the defeat of the government in 1932 he remained as a TD until 1938. That year he was appointed to the Irish Senate, where he remained until retiring from politics in 1943.

One of their sons, Dr. Garret FitzGerald, also served as Minister for Foreign Affairs in the 1970s and served as Taoiseach on two occasions in the 1980s. – Desmond FitzGerald died on 9 April 1947, in Dublin, Ireland, aged 59.