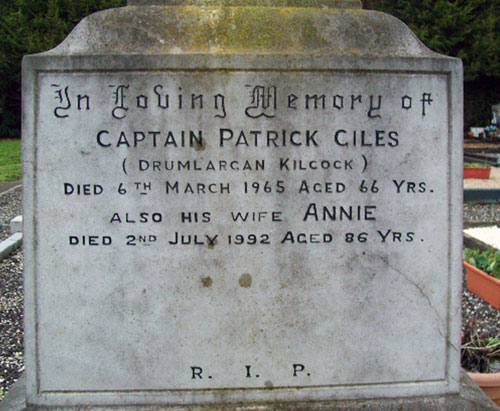 Captain Patrick Giles (Irish: Pádraig Mac Giolla Íosa; 1899-1965) was an Irish Fine Gael politician. He was born in 1899 on a family farm outside Longwood village in County Meath. During the War of Independence he was a member of the IRB, and was captain of the local Longwood Company. In 1920 he and some of his brothers took part in a raid on Trim RIC Barracks, which was burnt to the ground. The aim of the raid was to supply arms to local volunteers. After the raid the arms were dispersed to different sites, one of which was the Giles family farm. During a raid by the Crown forces, his name was found on a note linking him to the storing of these arms and he was sent to prison in Perth, Scotland for three years, but he got out after one year shortly before the Anglo-Irish Truce. In the split that followed after the Anglo-Irish Treaty, he, like most of the IRA in County Meath took the Pro-treaty side. Later he served in the National Army.