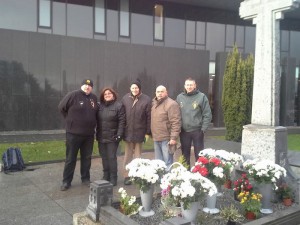 For years, Michael Collins’s grave lay neglected. Then one man decided it was time to restore the lost leader to his rightful place.

Later this month. Mr Brian Lenthan will give the memorial oration at Beal ma mBláth in West Cock commemorating the death of General Michael Collins on August 22, 1922, lt will be the nest time ever that a Fianna Fail minister has appeared at the annual ceremony for Collins, the lost leader, so it should be a moment of national reconciliation.

But I want to recount the story of another Lenihan – no relation – who has made it his Iifes mission to restore and tend the grave of Michael Collins at Clasnevin Cemetery in Dublin. For many decades., the State — notably under Fianna Fail administrations – Ignored Collins grave and by 1980 it had become run-down and neglected, Denis Lenihan, a tall, lean bachelor living nearby, used to come to the cemetery on Sundays to say a decade of the rosary f for his mother, who had died in 1979. Denis, who was 80 this year. was always interested In Michael Collins – his father had been in the old IRA and had been interned at Ballykinlar. Co Down – and would also visit Collins’s last resting place.

It struck him how shabby the Collins grave looked. although the family In Cork had done their best to maintain it. It was constructed with stark austerity. as, again, prevailing State authorities frowned on anything elaborate. The tomb-stone just gives the date of Collins’s birth (wrongly) and the date of his death, mainly in Irish, with the coda “Erected by his brothers and sisters”.

Denis decided to dedicate the rest of his life to restoring this national memorial, and to ensure that fresh flowers would adorn it every week He also paid. personally, to have it cleaned.

The grave is now clean, spruce and dignified. with varying numbers of vases of flowers, as well as garlands of red and white carnations. which Denis has learned to fashion himself, it is a reat magnet for visitors from all over the world some of whom are regulars. There is a mysterious French lady, who only identifies herself as Veronique, who comes from Paris four times a year, leaving flowers in Collins’s, honour.

What made Denis such an ardent fan of Michael Collins memory that it has dominated his life? Initially. it was the silence. When he was growing up in Naas in the 1930s and 1940s. no mention was made Of Collins at all. Denis’s father died – of tuberculosis – when Denis was only a year old„ and when he asked questions of his widowed mother, who was struggling to raise four children on a tiny sum, she would tactfully say that her own family was never invohed with politics. ‘The Civil War cast a lorng shadow, and people wanted to put the put the bitter divisions behind them.

But the more Denis learned about Mick Collins, the more his admiration grew — ‘the humanity of the man, the generosity’- and came to feel that he would do anything -to put that man in his rightful place” His dedication also brought him into many an interesting highway and byway of history. He made friends with Vinny Byrne the last of Michael’s comrades to die, in the 1990s. He tracked down – by visiting every nursing home in Clondalkin Fonsie Culleton. who, as a 14-year-old boy, became Collins’s ‘mascot’ in the Free State army: there is as famous photograph of Alphonsus Culliton, Like a little drummer boy in a kilt, walking behind Collins near Portobello Barracks. Fonsie was In his 80s when Denis located him, but they had several years of friendship talking about “The Big Fellow”,

Denis also made a big effort to find the car that carried Collins when halted by that fatal ambush. It was an irnpressive Leyland Straight – on a par with a Rolls-Royce – registered TB 7627. It cost £5,000 In 1922, Denis has tried every-where, even travelling to Africa when he heard a report that a Nigerian politician had bought it. He has never been able to trace what became of it, but, by way of compensation, an elderly man who had been a funeral chauffeur gave him a button from Michael Collins’s uniform. which he had surreptitiously taken from the hero’s remains.

Last pear, Denis injured his back while carrying vast tanks of water for graveyard flowera, and It became difficult for him to continue, but a rota of younger men, James Langton with Paul Fleming and Ron Daly, have now taken over the care of the Collins grave,

Initially Denis paid for the flowers himself – he has an American Pension from working in the Californian Aircraft industry, whish helped – but now the Collins 22 Society, founded five years ago to honour Michael Collins memory, can provide some support.

Denis says that Michael Collins brought his parents together – his father was released from iinternment after the 1921 Treaty was signed so in a way he owes General Collins his life. In carry out thls quiet and beautiful task Denis Lenihan has surely repaid the debt. 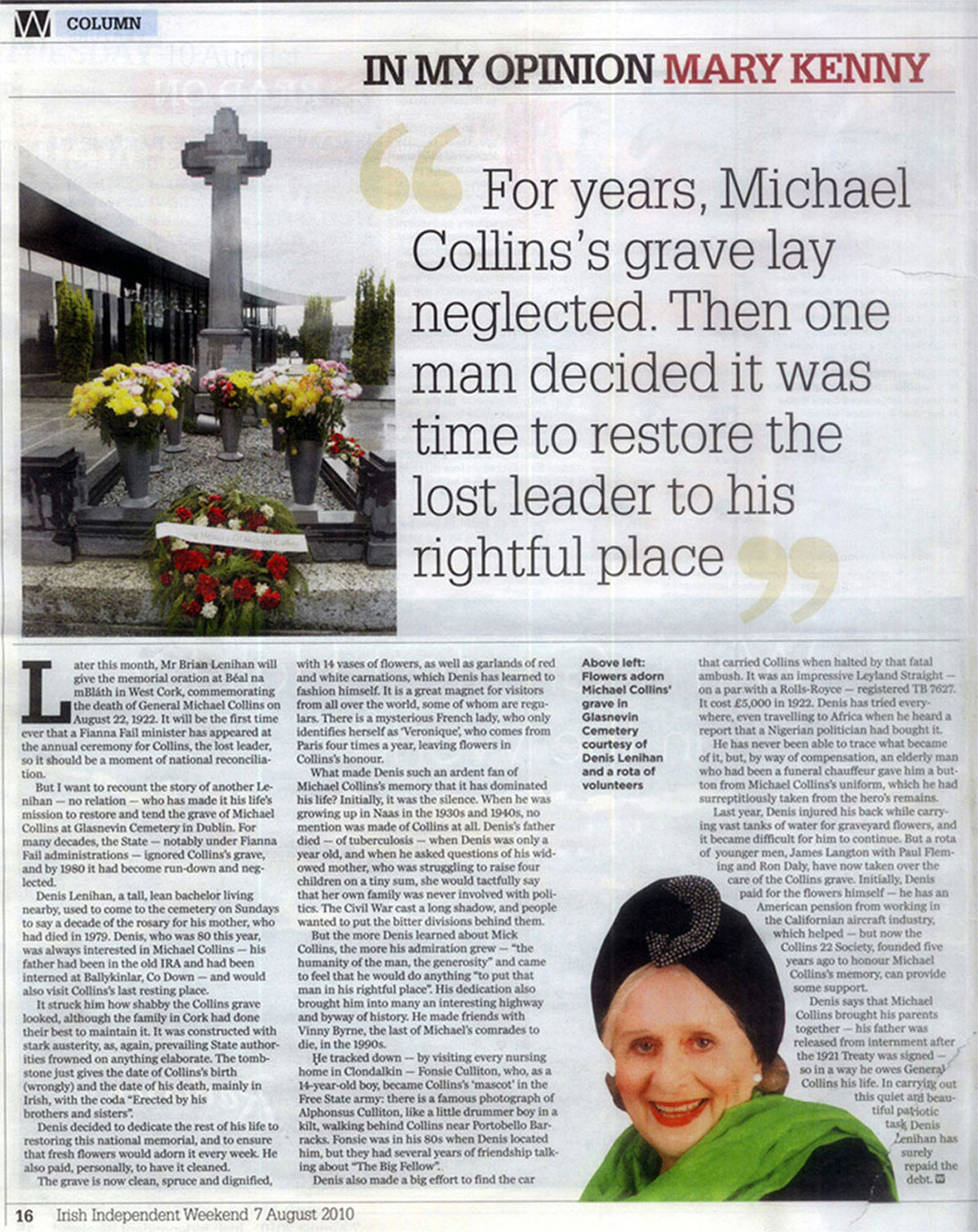